The mainstream media hasn't exactly picked up the story, but we're starting to see "Smart Car" drivers die in fatal accidents. Last week, a North Carolina man perished in a fatal accident after he ran through a stop sign while driving his Smart Car. 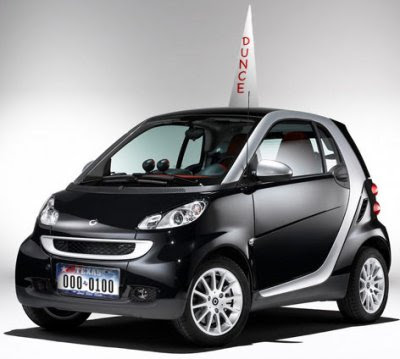 In February, South African soap opera star Ashley Callie died after her Smart Car plowed into a Renault head on.

Don't get me wrong, a Smart Car is infinitely safer than, say, a motorcycle. But it's not exactly the kind of car I'd put my wife and kids in.

When it comes to CAFE standards and the like, the Democrats' environmental nutjob supporters are intent on pushing us into these rolling deathtraps.

Presumably, this is part of their grand plan to save money on Democrat-controlled health care once they jam socialized medicine down our throats.

at 10:26 AM
Email ThisBlogThis!Share to TwitterShare to FacebookShare to Pinterest
Labels: Autos, Climate, Democrats, Energy