I confess to not having read Keynes. I have merely looked at the 11 recessions since World War II, as well as the Great Depression. In that data, there is zero evidence that government spending helps, and some evidence that it hurts... 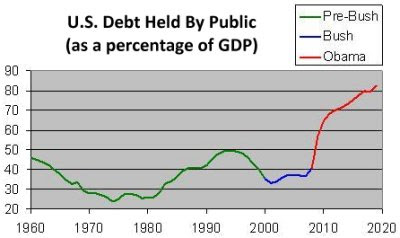 ...Bush's average level of debt was a hair below average, at least up until the beginning of this recent recession. At the end of 2007 it stood at 36.8% of GDP, pretty much where it had been for the previous several decades.

Per [the Keynesians], President Bush should have spent a lot [more] in 2008. It's the only way to get out of a recession... 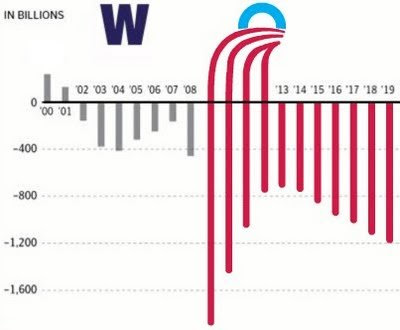 Now here is where it gets fun: Obama steps in. The very first year under Obama, 2009, the deficit is expected to be about $1.84 trillion. Here are some fun facts regarding Obama's budgets from 2009 through 2019.

Worse yet, these numbers ignore the "off-the-books" entitlement deficits that, by some estimates, are nearing $100 trillion.

This reckless administration and this reckless Congress are bankrupting the country and endangering the American way of life for our children and grandchildren. The "Stimulus" was a failure. The "special budget appropriations" were a disaster. The Clunkers program was a catastrophe. Health care? Should they get their hands on 20% of the economy, I think we can predict what will happen.

There is no valid, rational argument to explain Democrats' behavior. Think about that statement for a moment. And wait for 2010. Every Democrat must go.

at 11:28 AM
Email ThisBlogThis!Share to TwitterShare to FacebookShare to Pinterest
Labels: Democrats, Economy, Obama, Pelosi, Reid