All six of CNN's "undecided voters" were Democratic operatives

UPDATES BELOW - CNN hits bottom and digs: All six debate questioners appear to be Democratic Party operatives. So much for "ordinary people, undecided voters". To paraphrase Junior Soprano, CNN is so far up the DNC's hind end, Howard Dean can taste hair gel. 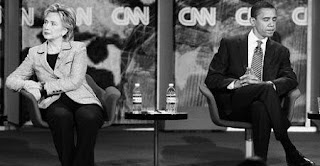 In a nutshell, CNN's six "undecided voters" were:

Wow. This looks "rather" like a scandal. Hot Air:

...You’d think the network’s audience might want to know who among the questioners has had a paid, formal relationship with the party.

...I went back to the beginning of the debate to see how Blitzer introduced the format. Did he offer any details on who’d be doing the questioning? Why, yes. After mentioning that the debate was sponsored by the national party — something likely understood by most viewers as a mere formality — he described them as “ordinary people, undecided voters.” Note: not even “undecided Democrats.” Just undecided.

Word on the street is that Hillary's staffers are extremely pleased with CNN's Wolf Blitzer for his softball questioning of Sen. Clinton during Thursday's Las Vegas debate. Blitzer "was outstanding, and did not gang up like Russert did in Philadelphia. He avoided personal attacks, remained professional and ran the best debate so far."

Who were the questioners upon whom Blitzer called? According to CNN, they were "ordinary people, undecided voters.” Like these folks:

Plant #1: LaShannon Spencer, whom Blitzer introduced as an "undecided voter", was tagged by Dan Riehl: in truth, she served as the political director of the Democratic Party of Arkansas.

Plant #2: Khalid Kahn, who expressed concern about profiling and the Patriot Act, asked "[m]y question is that -- our civil liberties have been taken away from us. What are you going to do to protect Americans from this kind of harassment?" Classical Values notes that Mr. Kahn is the president of the Islamic Society of Nevada, who has hosted conferences like this one (with guest speakers like Muzzamil Siddiqi). In fact, Kahn in no stranger to CNN, appearing on a show called Keeping the Faith in Sin City. 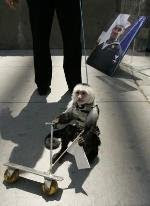 Plant #3: Suzanne Jackson -- mother of a three-term Iraq war veteran -- is aso a well-known antiwar activist. She appeared in the Las Vegas Review Journal protesting -- with a poor monkey, no less -- outside of Harry Reid's office in May. Note: Suzanne Jackson may have been mistaken with Jeannie Jackson, another vet's Mom. See Update IX, below. 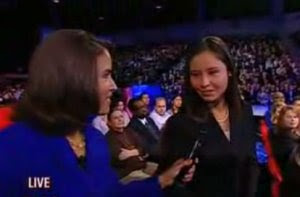 Plant #4: Maria Luisa -- the UNLV student who asked Hillary Clinton whether she preferred "diamonds or pearls" -- wrote that CNN forced her to ask the "frilly" question instead of a pre-approved query regarding the Yucca Mountain nuclear waste facility.

Update: Andy writes to point out the eerie similarities between Maria L. Parra-Sandoval and "Maria Luisa." Regarding Ms. Parra-Sandoval, the UNLV website states:

This spring she will serve as the political communications intern for Senator Harry Reid in Washington, D.C. Currently a junior at UNLV, Maria is... is an immigrant on a quest to become a United States citizen.

In other words, she's not even eligible to vote, unless the Democrats changed the rules when I wasn't looking (Added later: Commenter wjb states that "Maria Parra-Sandoval was sworn in as U.S. a citizen in Las Vegas by Magistrate Judge Lawrence R. Leavitt in March 2006." So presumably she really is eligible to vote).

Update II: rumors are flying of a fifth plant. An anonymous commenter at Gateway Pundit writes that the "50-ish lady who 'asked" her memorized question was a union offical. Gee, lucky she got in!" Judy Bagley, a 27-year cashier at Fitzgerald's was quoted in RGT Online (a gaming magazine) in an article about Culinary Workers Union Local 226's collective bargaining agreement.

Update III: Judy Bagley was definitely a fifth plant. An anonymous email alerts me to this portion of the debate transcript:

Obama: Well, first of all, Judy, thank you for the question, and thanks for the great work you do on behalf of the culinary workers, a great union here.

Update IV: an anonymous email alerts me to a possible sixth and final plant. George Ambriz is an Executive Director of the ¡Sí Se Puede! Foundation and is a recruiter at UNLV. His bio states:

George joins our team from Douglas, Arizona, having earned his associate’s degree in administration of justice from Cochise College in 2000. He obtained his bachelor’s degree in political science and criminal justice from Western New Mexico University. He is currently completing a master’s degree in ethics and policy studies at UNLV. He plans to pursue doctorate and law degrees, practice corporate law, and become active in politics.

Care to guess which party's politics George is active in? 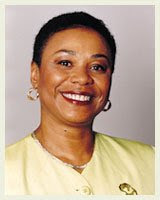 Update V: Andy writes to add some more background on Suzanne ("Jeannie") Jackson. On September 20, 2001, Rep. Barbara Lee (D-CA) cast the only vote against the resolution authorizing President Bush to use "all necessary and appropriate force" against anyone associated with the terrorist attacks of September 11th.

Jeannie Jackson wrote a supportive note on the Mother Jones website. She's active on the site of Soros front group Americans United for Change and hangs out at Dem site Think Progress. She also had a harsh antiwar letter published in the Las Vegas Review-Journal. Andy's snarky question: "Just another undecided voter I guess. Right?"

Update VI: A commenter at LGF provides an insightful summary:

Wow this is a scandal.

All being presented by CNN as undecided voters.

Update VII: An anonymous email alerts us to Kahn's background as a heavy Democratic contributor (e.g., $2000 to Harry Reid earlier this year):

Ambriz was just before my time at WNMU, but I later met him in Las Vegas at a model United Nations conference. Like me, Ambriz was heavily involved in student government and other clubs while at WNMU — he served as president of MEChA... 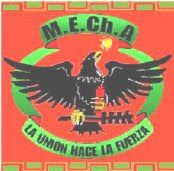 According to this website, "The official national symbol of MEChA is an eagle holding a machete-like weapon and a stick of dynamite... The acronym MEChA stands for Movimiento Estudiantil Chicano de Aztlan or Chicano Student Movement of Aztlan... [it] is an Hispanic separatist organization that encourages anti-American activities and civil disobedience... [they] romanticize Mexican claims to the "lost Territories" of the Southwestern United States -- a Chicano country called Aztlan. In its national constitution, MEChA calls for self-determination by its members to liberate Aztlan."

From all appearances, MEChA wants to overthrow the United States government. The American Patrol has more.

In a discussion board post, George Ambriz states "my name is George R. Ambriz, former student of Western New Mexico University, more importantly, a former M.E.Ch.A. President... we worked in sync... with the local and state Democratic Party to inform many people about the importance of voting..."

Update IX: An alert reader notes that Catherine Jackson and Jeannie Jackson -- both Mothers of Iraq War vets -- may have been mistaken for each other by several bloggers, yours truly included. More info to come.

Update X: A pro-Obama blog links to this story and offers some additional insights:

LaShannon Spencer, the woman who asked about court judges, is a high-level staffer for the Arkansas Democratic Party and has been so since the 1990s. Bill and Hillary hail from Arkansas.

Update XI: It appears CNN has removed Ms. Spencer from their copy of the transcript!

* * *
Dan Riehl also notes that of 1,000 tickets given to UNLV, a measly one hundred made it to students.

I'm glad CNN randomly selected ordinary people like you and me. We wouldn't want anyone to think that Hillary was shielded from all of the tough, grueling questions that Tim Russert asked.

Seriously, it looks like CNN and Hillary's staffers (but I repeat myself) really had this thing rigged from the get-go to avoid a Russert-esque browbeating.

Hat tip: Larywn. Instapundit, Gateway Pundit and Jammie Wearing Fool were on this from the very start. And even the New York Times is criticizing CNN's Hillary bias.

Notes: Captain's Quarters and the NRO are somewhat underwhelmed with the magnitude of the controversy. Frequent commenter jpm100 put it best when he said:

It isn't that they are Democrats.

They basically could be counted upon to softball Hillary because their careers depended on it.

at 11:31 AM
Email ThisBlogThis!Share to TwitterShare to FacebookShare to Pinterest
Labels: Democrats, Hillary, MSM

So it is now July of 2012 and this is the first time I have seen any of this information. And I am outraged even today that CNN would pull should crap.

Elements in the MSM should be charged with public fraud. Directly publishing falsehoods at this level crosses the line. This is not Freedom of Speech - it is Crimes against the State.

How far will they go next time?

What falsehoods will they publish next?

It has to stop somewhere.

First time reading this for me too. Shocking! Corruption everywhere :(

You poor fools still think the empire will slit it's own throat?

There will be no charges. No accountability. No truth.