Actually, they're forgetting about an important part of Hillary's past. In her work as an attorney, she led a couple of associates at the Rose Law Firm. Let's recap.

In January 1996, a long sought-after copy of billing records from the Rose Law Firm were identified. The mysterious reappearance of the billing records, sought for years via various subpoenas, has never been fully explained. Shortly after their rediscovery, Hillary Clinton made history as the only First Lady ever called to testify before a Grand Jury.

Of particular interest to investigators has been Ms. Clinton's work on an option agreement that "was principally designed to further obfuscate and hide the fraudulent nature of the underlying Castle Grande transactions." Hillary claimed that her initials on the billing records were effectively a misrepresentation, that they were those of an associate, and that "it was not an area that I really know anything... about." 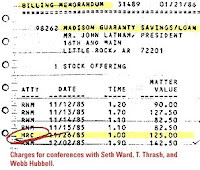 Hillary also told a federal grand jury that she didn't work on or manage a certain key project in the Whitewater scandal; however, she did so, was caught in the apparent fib, and then stated that she didn't recognize it by that name.

* * *
So when those evil Rethuglicans claim Hillary has no management experience, she can proudly rebut the charges by pointing to her executive leadership work at the Rose Law Firm.