That's one way you could describe the national debt. Along with "oppressive", "currency-destroying" and "an inter-generational catastrophe". The interactive U.S. debt clock is worth a visit if you enjoy a heart-wrenching shock.


Over the past eight decades, Democrats have implemented a series of budget-busting, epic failures -- Social Security, Medicare, "Great Society", AFT/NEA education monopolies, etc. -- that inexorably increase the size, scope and power of the federal government while leaving a tidal wave of debt for successive generations.


So what do the Obama-Pelosi-Reid Democrats do? 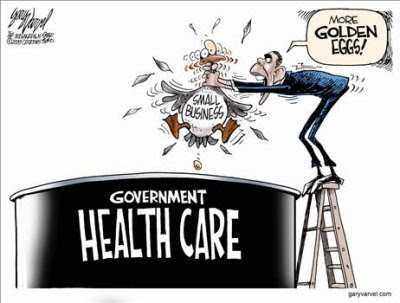 They nationalized the auto companies as a payoff to union bosses, they nationalized the banks, they passed unread "Stimulus" packages that have increased unemployment, they've tried to stifle economic development with a UN-inspired climate bunko scam and now they're earnestly trying to destroy the two-thirds of health care they haven't already ruined.

The Indian Health Service and the Veteran's Administration are the templates we can bank on the Democrats replicating if they shove socialized medicine down our throats.