At the height of the 2008 Presidential campaign, I recall passing neighbors' houses adorned with Obama signs. 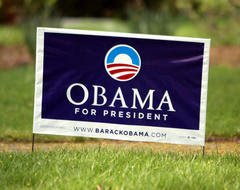 I remember my anger and confusion. Thinking to myself, "how could any rational, educated person support a man who has no executive experience? Who worked with the Democrat Socialists of America? Who represented ACORN as an attorney? ACORN! The antithesis of all things American, undermining the integrity of our very voting system!

After the election, I recall a bitter taste in my mouth. Scrutinizing my neighbors. Questioning them, mentally, as to their motives.

Six months later, the Obama bumper stickers and signs have largely disappeared. The economic disaster, endemic to any Socialist strategy -- and especially that of Alinsky's acolyte -- is apparent to all but the most obtuse observer.

Therefore, I have produced the following yard sign for insertion into those very same neighbors' lawns. Perhaps at 04:00 hours, when the typical human brain is at its nadir.

Just insert the sign, below, into their front yards to express your gratitude for their votes. 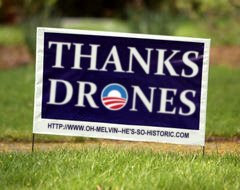 In this way, you can register your sincere appreciation for their act of voting us into a depression. For voting in favor of an economic catastrophe.

They'll thank you later. Perhaps in the re-education camps.