Our resident health care guru, an industry insider who uses the nomme de guerre "Mister R.", is back. In this chapter, he deals with the intersection of the insurance industry, Obamacare and the Constitution. 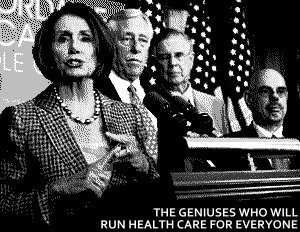 2. Each state has their own mandates that must be included in insurance coverage. Now, if the program is self-insured, there is no need to abide by state mandates, and the federal government will argue, through a combination of premiums and taxes, they will be paying the claims on a self-insured basis (although an argument can be made the taxes levied against the rich serve as "insurance" to protect the program's viability). However, this directly contradicts what Obama said during the campaign: he was against John McCain's health care plan because, by allowing insurance companies to do business across state lines, consumers would lose the "protections" each state provides. "Protections", in other words, are mandates that serve to force insurance companies to provide coverage the state deems necessary. Bottom line, Obama will not honor each states mandates because keeping track of all 50 states will be a bureaucratic nightmare and will drive up the program's cost. It will be a cookie cutter program.

3. As a self-insured product (although, again, there can be an argument made that this is insured), any entity that adjudicates and pays the clams must file as a "Third Party Administrator" in each state, and each TPA is regulated by the respective states. Will the feds subject themselves to state supervision? Don't hold your breath. But what this illustrates is there is clearly a 10th amendment issue. It can be argued that each individual state can prohibit the federal government from doing business in their state and collecting premiums from its residents.

4. If the federal government continues to call this "insurance", which it does continuously by using the term "public insurance option," then the feds have a real problem. In the insurance industry, if you represent your product as "insurance", you subject yourself to state regulation. In this case, Obama has continuously sold this program as "insurance." As such, each state could force Obama to abide by their state regulations, file their program with state divisions of insurance and pay applicable taxes and fees. Any state, under the 10th amendment, would have the authority to do so, in my opinion, although I am not an attorney.

At the very minimum, Obama's plan presents a serious challenge to the 10th amendment and the states rights to protect their consumers. Obama's plan to force people into the federal program is a clear violation of the commerce clause: any individual has the right to shop his/her need for health care to anyone duly licensed to do so, however, Obama wants ignore that right.

Because Obama has clearly shown his disdain for the Constitution in so many areas, his total disregard for our founding document when it comes to health care is not surprising.