Ed Morrissey writes, "...in almost six years of blogging, rarely have I seen anyone pack as much letter-perfect constitutional instruction as one soldier did at an ObamaCare townhall/protest yesterday in St. Louis. It doesn’t surprise me at all that a young soldier would understand the concepts and the historical context of the Constitution. It surprises me that he has to explain it to the people in Congress." 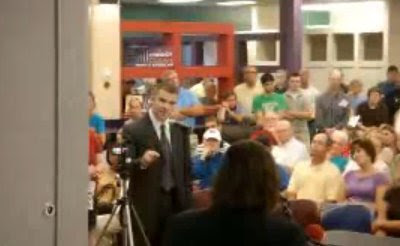 Given the egregious posse of Boxer, Dodd, Feinstein, Frank, Mollohan, Murtha, Obey, Pelosi, Rangel, Reid and Waters -- so crooked you can open wine-bottles with 'em -- I think Ed is vastly overestimating Democrats in Congress.

They appear to be interested in only one thing: personal enrichment. The Constitution can go to hell as far as they're concerned.