Well, I'm certainly no conspiracy theorist when it comes to Barack Obama's birthplace, having done my best to help debunk the birth certificate controversy. But this article, from Ghana's leading newspaper, certainly won't help dull the outcry any. 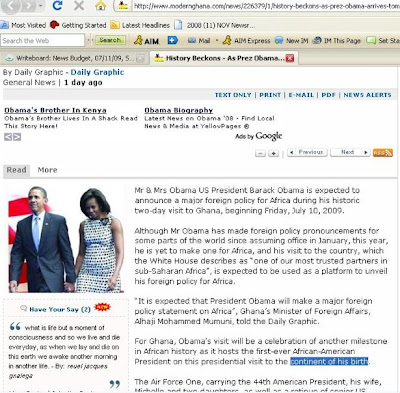 Although Mr Obama has made foreign policy pronouncements for some parts of the world since assuming office in January, this year, he is yet to make one for Africa, and his visit to the country, which the White House describes as “one of our most trusted partners in sub-Saharan Africa”, is expected to be used as a platform to unveil his foreign policy for Africa.

For Ghana, Obama's visit will be a celebration of another milestone in African history as it hosts the first-ever African-American President on this presidential visit to the continent of his birth.

The Air Force One, carrying the 44th American President, his wife, Michelle and two daughters, as well as a retinue of senior US government officials, is expected to touch down at the Kotoka International Airport at 8:30p.m. tomorrow amid tight security by US and Ghanaian security agents...