Looking at the Left has must-see coverage of Nancy Pelosi's visit to Denver, where anti-ObamaCare protesters faced paid hacks rustled up by "Organizing for America". OFA is Barack Obama's personal "army" of supporters (as an aside, has any President in the history of the Republic had his own personal cadre of supporters that is completely separate from his political party?). 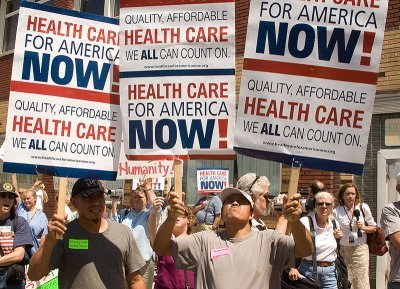 ...[the area] is adjacent to Denver’s day laborer pickup street, Park Avenue. Being fluent in Spanish, El Marco asked these guys “¿hablan ingles?” “casi nada” was the reply from our amigo on the left. I asked him if he could tell me what the signs said. “¿Quien sabe?” (who knows?) was all he said to me, with a big grin. I’m kicking myself for not asking them how much they were getting paid to support the grassroots... 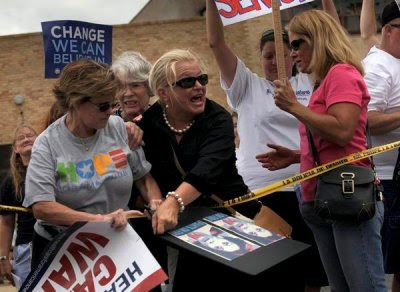 Take note of the lady [in black]. She is holding a sign that reads “Pants on Fire” with Pelosi’s image. The image is repeated three times on her sign. There are no other words. I left the event early but the photo below, from the Denver Post, shows what I missed. The astrozoid on the left below, with the HOPE T-shirt, decided that she didn’t like the Nancy Pants on Fire sign. Not a problem. Just grab it... [This picture shows the] woman in black struggl[ing] to maintain her free speech while calling for help from police nearby... 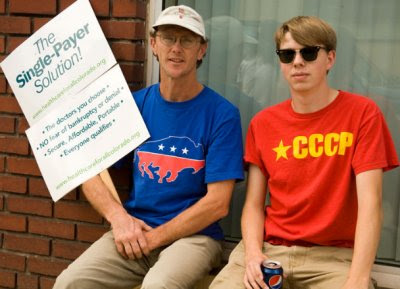 These two were taking a break while they waited for Nancy to emerge in her SUV. It’s nice when Democrats spend time with their children...

Now that's astroturf we can believe in!