And you'd expect anything different from this president?

Yesterday, I had the feeling that... Obama's announced withdrawal of our troops from Iraq was purely political, timed for the 2012 election as a way of rallying his far-Left, anti-military, Code Pinko base. 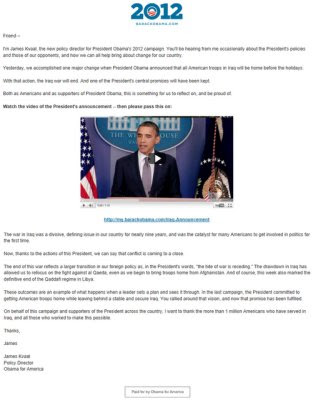 This e-mail from Obama's campaign today proves it...

I'm James Kvaal, the new policy director for President Obama's 2012 campaign... Yesterday, we accomplished one major change when President Obama announced that all American troops in Iraq will be home before the holidays.

With that action, the Iraq war will end. And one of the President's central promises will have been kept... Now, thanks to the actions of this President, we can say that conflict is coming to a close. [Ed: not the military, mind you... "this President"]

...These outcomes are an example of what happens when a leader sets a plan and sees it through. In the last campaign, the President committed to getting American troops home while leaving behind a stable and secure Iraq. You rallied around that vision, and now that promise has been fulfilled.

"And we accept Visa, Mastercard and PayPal!"

Of course, back in the little land we like to call reality, the decision will have significant consequences for our allies in the Middle East. Up until Friday, the Obama Administration had insisted that negotiations were on track for extending the presence of a small residual force that U.S. and Iraqi military leaders agreed were necessary to support Iraqi operations in key areas such as counterterrorism, air support, intelligence gathering, logistics, and training. But Friday, in a hard-hitting article posted on The Cable blog, Josh Rogin reported that the Administration had bungled the negotiations...

...In the wake of its decision, the Obama Administration is already anticipating the consequences of the power vacuum it has created. In a series of interviews on Sunday, Secretary of State Hillary Clinton warned Iran that even though troops will be withdrawn, the U.S. will still maintain a presence in the region. “Iran would be badly miscalculating if they did not look at the entire region and all of our presence in many countries in the region, both in bases, in training, with NATO allies, like Turkey.”

The reality, though, is that the United States has weakened its presence at a time when the region can least afford it.

We may soon find out what happens in a power vacuum when Iran's religious fanatics -- bent on "martyrdom" -- acquire nuclear weapons.

That's what the (Lefty) folks who
claim that "We should not be the world's policeman" fail to note. If we step down from being the most powerful nation in the world, WHO exactly should we trust to take on that role?

Nature abhors a vacuum, as they say, and it's as certain as tomorrow's sunrise that SOMEBODY will step up and try to influence the world "the right way" (--according to their own delightfully nuanced version of "right"--) if and when we decide it's too much trouble and expense to concern ourselves about what goes on beyond our borders.

(A distinction that seems to totally elude this administration.)

Bush lied us into the ten year wr. You want to fight there. Go. But leave our young people alone, warmonger. Time for Iraq to take care of itself. why be policeman to the world and then badmouth the democrats for deficit, caused by Bush tax breaks for the wealthy?

Hey, schmuck --- you mean the same Iraq war that Democrats overwhelmingly supported? And that Obama kept us enmeshed in? That war?