It was hailed as the scientific study that ended the global warming debate once and for all – the research that, in the words of its director, ‘proved you should not be a sceptic, at least not any longer’.

Professor Richard Muller, of Berkeley University in California, and his colleagues from the Berkeley Earth Surface Temperatures project team (BEST) claimed to have shown that the planet has warmed by almost a degree centigrade since 1950 and is warming continually... [their] work was cited around the world as irrefutable evidence that only the most stringent measures to reduce carbon dioxide emissions can save civilisation as we know it...

...But today ... a leading member of Prof Muller’s team has accused him of trying to mislead the public by hiding the fact that BEST’s research shows global warming has stopped.

Prof Judith Curry, who chairs the Department of Earth and Atmospheric Sciences at America’s prestigious Georgia Institute of Technology, said that Prof Muller’s claim that he has proven global warming sceptics wrong was also a ‘huge mistake’, with no scientific basis... Curry is a distinguished climate researcher with more than 30 years experience and the second named co-author of the BEST project’s four research papers.

...She said this affair had to be compared to the notorious ‘Climategate’ scandal two years ago... 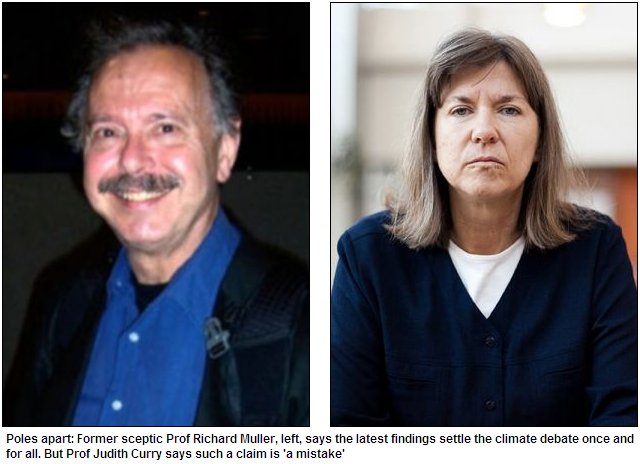 ...In fact, Prof Curry said, the project’s research data show there has been no increase in world temperatures since the end of the Nineties – a fact confirmed by a new analysis that The Mail on Sunday has obtained...

...a report to be published today by the Global Warming Policy Foundation ... drawn from the BEST project’s data and revealed on its website ... shows that the trend of the last decade is absolutely flat, with no increase at all – though the levels of carbon dioxide in the atmosphere have carried on rising relentlessly...

...In fact, she added, in the wake of the unexpected global warming standstill, many climate scientists who had previously rejected sceptics’ arguments were now taking them much more seriously... They were finally addressing questions such as the influence of clouds, natural temperature cycles and solar radiation – as they should have done, she said, a long time ago.

Rumor has it that Dr. James Hansen, the infamous, taxpayer-funded climate kook, is on suicide watch.

And thison Judith Curry is interesting too.

"...She said this affair had to be compared to the notorious ‘Climategate’ scandal two years ago..."

Ok, lets compare them.
This is what her study was researching...
berkeleyearth.org/images/Updated_Comparison_10.jpg

Climategate was the suggestion that the red line was artificially made too high, while being lower.

This here almost claim of overselling is that the black line is somehow being overstated, while basically matching the rest.

Both are championed by people who want to suggest there is no consensus of an upward trend in warming.

If you honestly believe this, just show that graph and print the words "there doesn't appear to be any consensus here of an upward trend". Simple.
All you're missing is the spine.

Cannibal: You have no idea as to what "ClimateGate" was about.
Go look into it and learn.