Even a casual news consumer knows the long and ugly history of The New York Times. Its wanton dismissal of the Holocaust, for instance, was among the most despicable actions of a free press in American history.

...at the end of [World War II] and for decades afterward, Americans claimed they did not know about the Holocaust as it was happening. How was it possible for so much information to be available in the mass media and yet simultaneously for the public to be ignorant?

The reason is that the American media in general and the New York Times in particular never treated the Holocaust as an important news story. From the start of the war in Europe to its end nearly six years later, the story of the Holocaust made the Times front page only 26 times out of 24,000 front-page stories, and most of those stories referred to the victims as “refugees” or “persecuted minorities.” In only six of those stories were Jews identified on page one as the primary victims.

One of the more vexing questions of recent vintage relates to the treatment of Barack Obama by journalists during the run-up to the 2008 election. How did an unknown community organizer -- with minimal experience and documented connections to Marxists, virulent racists, domestic terrorists and antisemites -- rise to the presidency?

Investigative journalist James O'Keefe -- who helped take down ACORN with a stunning expose of its support of criminal activity -- decided to find out. He secretly recorded a class led by NYU Journalism professors and New York Times consultants Jay Rosen and Clay Shirky.

What he discovered was a complete disregard for journalistic ethics and a primer on how to disguise a political agenda as news coverage.

How, for example, could the Times help market the viability of an unknown like Barack Obama as a presidential canddiate?

...even if the Times says, OK, secretly we’re liberals and now publicly, we’re liberals, and there it is, they still have the dilemma of not wanting to create the news they cover. And it’s a difficult problem... 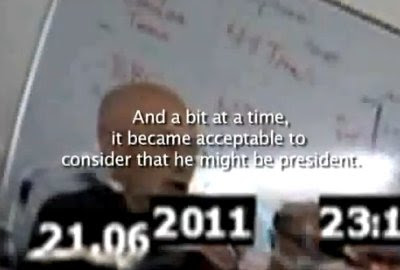 ...They got around it in a really interesting way with Obama, their obvious second favorite candidate after Clinton. Clinton, the liberal consensus candidate, would have been their, I think probably was their candidate on the inside for a while. But the Obama story was the huge dilemma for horse race political coverage because no one would have given you even hundred-to-one odds in 2006, no one would have given you hundred-to-one odds on an African-American president...

...But they ended up covering Obama because of the newsworthy things that were happening around the Obama campaign. So you could not say, “Oh my goodness, for the first time there’s a viable African American candidate.” Because by the act of saying that, you would be creating the story you were nominally covering. So they, they hung up on it. But they could say: “Oh my goodness, Obama Girl, isn’t this funny? This funny video that this young woman did about now our future president, or about now our current president. Or Will.I.Am did a video, a huge breakout video on YouTube. And so they covered it, they covered Obama from the Internet culture angle. And, a bit at a time, it became acceptable to consider that he might be president. But they needed someone else to make the first move.

Rosen and Shirky also discuss how the Times helped the Occupy Wall Street movement and how the media could help defeat Perry and Bachmann, who they specifically tarred as "crazy".

Having been stripped bare by O'Keefe, the defenders of legacy media have circled the wagons, claiming Shirky was not a consultant to the Times (Rosen is a regular contributor).

Whether Shirky is a paid consultant or not, he is clearly influential by dint of the heavy references and links to his work in the Times. According to Google's search engine, he has been referenced by the Times more than 5,300 times with a copious numbers of links to his work.

On his blog, Rosen offers a rambling set of explanations for his obvious and dishonest bias masquerading as "journalism".

And how did Rosen publicly react to this particular instance of classic investigative journalism? As you might have expected: he called O'Keefe a terrorist.

Which is about how you'd figure someone who writes for the Times to spin being caught red-handed. And I do mean red.

Whatever these pencil-necked twits are teaching, it ain't journalism.