Bulletin: French President Sarkozy Finds Gaddafi's Will -- Says It Pledged His Entire $200 Billion Fortune to "Save the EU"

Okay, I made that up. The European Union is toast and the only question is when the dominoes fall. If the bond markets are any indication, it won't be long.

I have summarized the fundamentals in this one graphic: the European dominoes of debt. Simply put, there is no way the EU authorities can stop the first domino--Greek default or equivalent writedown of its impossible debt load--from toppling the over-leveraged banks which will be rendered insolvent when forced to recognize their losses... 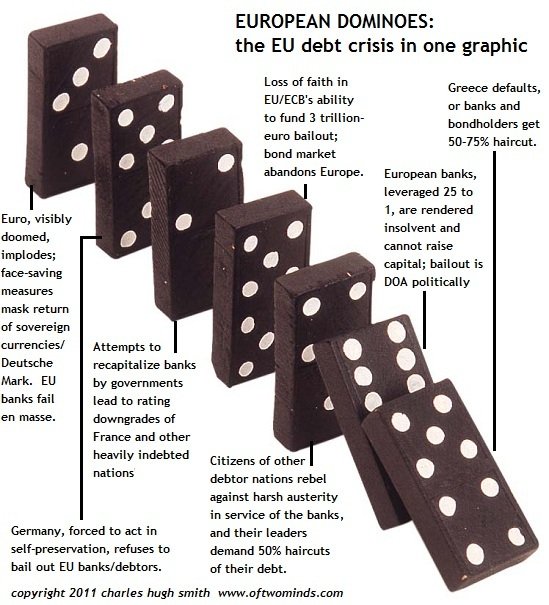 ...That leaves each nation with the politically unsavory option of bailing out its premier banks with taxpayer money, and squeezing the money out of its citizenry via higher taxes and austerity. That assumption of bank debt will in turn trigger downgrades of heavily indebted sovereign nations such as France, moves that will raise rates and make the bailout even more costly to taxpayers, who will also be suffering from reductions of income due to global recession.

Once the banks and bondholders accept a 50%-75% writedown in Greek debt, then the other debtor nations will be justified in demanding the same writedown in their crushing debts. This dynamic leads to estimates that 3 trillion euros will be needed to bail all the players out. Alternatively, total losses will equal 3 trillion euros, wiping out banks and bondholders of sovereign debt.

The German economy is simply not big enough to fund a 3 trillion-euro bailout... ...It has recently come to light that in the worst-case scenario (i.e. reality), "solving" Greece's debt crisis would absorb the entire EFSF Rescue Fund's 400 billion euros. By all accounts, every estimate of Greek tax revenue is overstated, and every estimate of its expenses understated; Greek GDP is collapsing. In all probability, the reality is worse than anyone is willing to confess...

I have an ominous feeling in the pit of my stomach that the European debt debacle will make Lehman's failure look like a frolic in the park.

Close, Doug. The European banks' capital will be wiped out several times over by multiple haircuts on sovereign debt, starting with Greece but ending...well, we don't know, do we?

Banks can be re-capitalized with government fiat money but the shareholders will be wiped out. That's usually around 40% of the value of most modern bourses' shares - maybe lower now after several bad years for financial institutions, but still lots of investors are going to lose a lot of their retirement funds. Yahoo Finance shows BNP (Bank National de Paris) with a $38B market capitalization, down 65% in 5 years. It'll go down another 100% on re-capitalization, the be reborn as BNP Newco, with the French government selling off its shares gradually over the next couple of decades.

The re-capitalization by fiat money means the pretty much complete nationalization of the French and German financial sectors, but still no taxes or autsterity required.