I can't tell whether this is a parody cover or not: 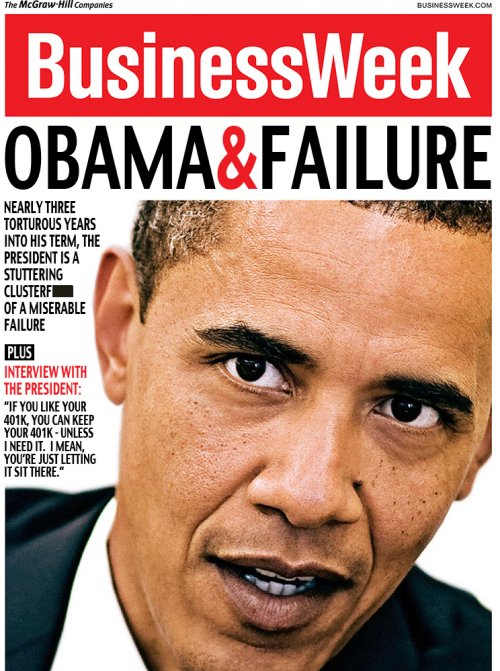 Okay, yes, I know it's a parody (courtesy of John E., via Jammie). The story precipitating the cover is truly shocking. Namely, the White House is already shredding the major 'features' of Obamacare that were used to game the CBO's assessment of its budget impact.

What's a guy to do when he's mired at a 38% approval rating? Why, abandon his signature achievement, of course.

The Obama administration says it is unable to go forward with a major program in the president's signature health care overhaul law — a new long-term care insurance plan.

Officials said Friday the long-term care program has critical design flaws that can't be fixed to make it financially self-sustaining.

Gee, maybe they should have read the bill before they passed it.

But a central design flaw dogged CLASS from the beginning. Unless large numbers of healthy people willingly sign up during their working years, soaring premiums driven by the needs of disabled beneficiaries would

...They knew it was a lie. Their actuaries told them so. The math was clear. They didn't care. If CLASS goosed the numbers for the broader bill -- thus helping secure the historic power grab they'd been salivating over forever -- these Statists were thrilled to adopt an "ends justifies the means" mentality. And that, my friends, is how the White House and Democrats manipulated the CBO score, lied their asses off to the American public, and passed their unaffordable, unwanted healthcare monstrosity under deliberately false pretenses. This. Crew. Must. Go.

Which reminds me of the bumper-sticker I just made.

Off topic: I really need a business manager to help me start selling some of this swag -- like my exclusive Fast & Furious t-shirt.

I really don't like this "we will pick and choose which laws to enforce" mentality.

I was wondering about that myself. Under what statutory authority does the president assume he can pick and choose parts of the law to enforce.

This is picking and choosing which laws will be enacted, not so much enforced, the dems forced this bill on the country, why not now force them to abide by it?