Here's My Guess: the Title and Subject of Mark Levin's Next Book 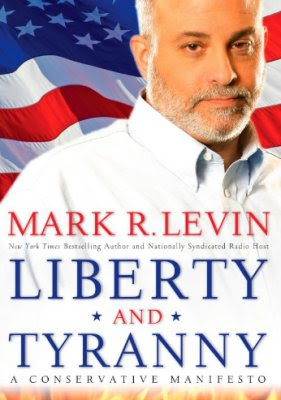 Best-selling author Mark Levin is a Constitutional renaissance man. Not only is he the author of several New York Times bestsellers, but he's also the fastest-growing radio talk show host in America. Oh, and on the side he runs Landmark Legal Foundation, a law firm that takes up significant Constitutional issues.

His most recent book -- Liberty and Tryanny -- arrived in 2009 to massive acclaim (it has since sold over 1.2 million copies). Jeffrey Lord of The American Spectator called it "The Book That Changed America"; it was a common sight at Tea Party rallies during the fight against President Obama's brand of socialized medicine.

Since that time, Levin's hinted on his show about his work on a new book. Reportedly completed in July, its title and subject are embargoed until the week before its release. That said, I've gathered enough information from his circuitous references to offer an educated guess.

Title: From Democracy to Despotism

Description: As our society frays thanks to the machinations of Barack Obama and Democrats in Congress, we would be well-served to review history. The strategies and tactics of the modern Left are not new; we have seen these machinations before and we must recognize them today.

From Russia's bloody 1917 revolution, to Mao's "People's Army"; from the Palestinian elections of Hamas to Mugabe's Zimbabwe; the world has seen populist and democratic movements many times before.

Most importantly, the Statists of the Left use the democratic process itself to destroy government and the civil society. Most recently, Saul Alinsky (the father of modern community organizing) and Columbia Professors Cloward and Piven have articulated strategies that undermine the American republic from within.

The bulwark standing in their way is the United States Constitution. As the Left's termites eat away at our legal foundation, it's incumbent upon patriotic Americans to learn from history's lessons and politically obliterate the infestation of those who mean to unravel our society.

Whether or not my prediction is accurate, I can say with confidence this about Levin's next book. It will be great.

how bout this as a guess:

seriously: i am abo.

and levin claims to be.

but his tirades against romney are helping obama.

btw: if i wasn't a fan of levin's i wouldn't listen and i wouldn't know about his tirades against mitt.

he is better when he attacks the left.

no one is better as a matter of fact.

I listen to Mark every day for all 3 hrs. and he has made it clear he will support the nominee. Romney is Obama lite, a big gov. pubbie. His health care folks advised Obama and he has connections to JOHN HOLDREN!!!

i have posted on levin v romney many times an always include the fact that levin is abo.

i said this in this thread, too.

the damage he has done despite that is dangerous.

as a shrewd and successful biznezman i bethcya romney likes to talk with all folks who are considered experts regardless of their political POV.

and remember jackie w, that advice doesn't come marked in boxes - one labeled good and the other marked bad.

a smart person always looks at problems from all angles.

especially a successful biznezman and politician.

especially a politician who wants to unity us all.

i read the nyt and nro and watch cnn msnbc and fox and read the bbc and the telegraph and jposyt and haaretz.

i have read marx and hayek.

that makes me more informed not wishy washy.

he earned a harvard jd and harvard mba simultaneously.

he's smarter than anyone else in the race.

he has good values.

he ran to the right of mccain 5 years ago and has stayed there.

he is to the right of perry on immigration and has a better economic plan than cain - and is a better biznezman.

CHRISTINE ODONNELL AGREES WITH ME:

Much like Hitler used the system to grab power in Germany. If this is actually the topic of that book, I'll buy it, considering the State of the Union...hell, I'll probably buy it anyway. Mr. Levin is the STRONGEST VOICE for the values that made this country great, and it's these values that will lead the USA into the future as the greatest country this world has ever seen!