The Overt and Underlying Message of #OWS

Hundreds of "Occupation" protesters were arrested today including 175 in Chicago and 45 in Phoenix. Yesterday, several police officers were hospitalized after protests turned violent in Manhattan. 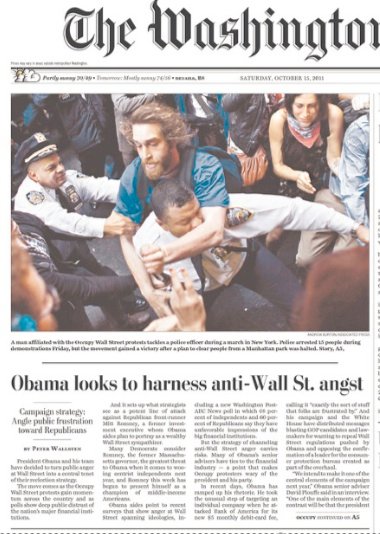 As have Communists, Nazis, George Soros, ACORN, and the SEIU.

And protesters continued to demonize Jews.

Curiously, the President is targeting -- by name -- America's only Jewish Republican Congressman. Days ago, Obama publicly pilloried Cantor, whipping up the crowd with statements like, "I'd like Mr. Cantor to come down here to Dallas and explain what in this jobs bill he doesn't believe in!"

Why would Obama not address the Speaker of the House -- the most powerful Republican in Congress -- John Boehner? Could it be because Boehner isn't Jewish, but Cantor is?

And why won't Democrats distance themselves from the overt anti-semitism seen at these protests? Not to mention the hatred and the violence?

The reader is left to speculate on these mysteries and the media's kid-glove treatment of the protesters.

It is deeply troubling that the most powerful person on earth (and his Party) would support such low life scum and their insipid talking points. But, it is how Hussein operates and he needs this to justify what he wants to do.
Pick anybody you work with/for, put this behavior on them and what do you see? Yep, somebody who has serious mental health issues. His wife can't stop eating, he calls his kids "advisors" and he still lives with his mother-in-law. An intervention is indicated.

O is a Muslim Communist, the worst of all worlds. His admin is filled with Maoists/Leninists, race-baiters, terrorist-enablers and wannabees and other assorted POS's.

The Dem party has become THE repository of anti-Semitism, but my fellow Jews can't see the writing on the wall; this is the same crap that happened in the 30's...the wealthy Jewish leaders refused to see what was going on. Same happened in Spain in the 1490's...the court Jews of Spain couldn't believe the King and Queen would turn on them.

So, Jews gave huge amounts of money and 78% of the votes to a man who cavorted with terrorists and Palestinian/terrorist supporters.

There is an article in the WSJ, making its rounds on the Net, of an interview with Mort Zuckerman, who professes to having been taken in by Obama in 2008.

Sheesh. I'm not a genius, nor rich like Mr. Zuckerman, but it didn't take a lot of investigation to realize Obama was going to be a disaster. But Jews, unfortunately, are liberals first and Jews second. I hate to admit it, as I love Judaism, I love being Jewish, but I'm angry at my own people for blindly supporting a man who hates us (but felt wonderfully free to USE us for support and money, and to lie, over and over, about what he would and had done for Israel. UGH).

Have we forgotten the way Netanyahu was treated, like garbage, at the White House? Oh, now the Dems lost NY-9, so Barry was a friend-of-Israel (for a day!), along with that other huge hypocritical Far Left skank, Billary, but in the end, Barry Hussein is an anti-capitalist jihadist Jew hater.

I'll not hold my breath to see condemnation for the anti-Semitism in the MSM, nor of the complete lack of civility and instead, the death threats and violence that is ACTUALLY part of the OWS, in contradistinction to the Tea Party rallies where the MSM LIED about the racism/violence/incivility.

I cried the night of the election in 2008, not that I loved McCain: I didn't and don't, but at least he was not an enemy of the U.S. or Israel. I cried because we DID elect a man who hates Western Civ and America and Israel.

Did you catch this anti-Israel organizer of the protests? http://biggovernment.com/sright/2011/10/16/lisa-fithian-occupy-organizer-union-educator-and-israel-hater/

History repeats, but it's going to be worse because the last time the haters of the Jewish people did not have the full backing of the President of the United States like they do now. Whatever happened to NEVER AGAIN?