My favorite T-shirt for pissing off liberals

Heading to the gym this evening wearing my guaranteed-to-piss-off-liberals T. 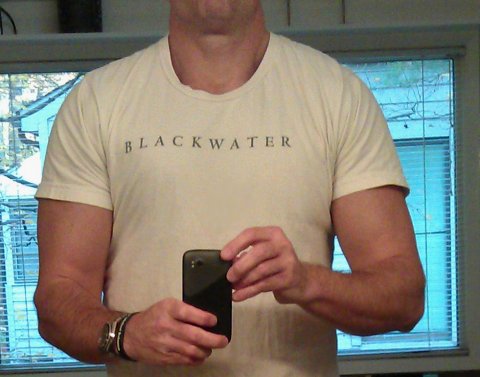 By the way, the band I'm wearing on my right hand is from DefendMichael.com, the site set up to support Michael Behenna's defense. Michael was 101st Airborne serving in Iraq. While questioning Ali Mansur, a known Al Qaeda operative, the terrorist suddenly attacked Behenna. In the course of defending himself, Mansur was killed.

Benenna was subsequently tried and sentenced to 25 years in Leavenworth. His sentence has since been reduced twice after reviews by the commanding general of 101st Airborne and by the Army Clemency Board.

If you have a couple of spare bucks, you can PayPal Michael's defense fund at DefendMichael.com.

at 8:04 PM
Email ThisBlogThis!Share to TwitterShare to FacebookShare to Pinterest
Labels: War, Workouts

You're a moron. Lookin' a bit flabby, too. Work out harder, DOUG.

@Reaganite - apparently, this troll is used to dealing with 16-year old girls. Telling them they look flabby and hurting their feelings.

Now we know who's been bothering my kids on Facebook.