Will Chaos in America Be Obama's October Surprise? [Dan from New York] 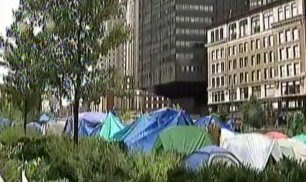 Watch the trajectory of “Occupy (name goes here)” protests carefully. It may tell us a lot about what the atmosphere in the country might be during the election campaign next year. I for one don’t think Obama will let a little thing like the polls stand in his way.

Oh, while we’re on the subject, Mayor Bloomberg has decided to handle these proles with kid gloves. Wouldn’t want to ruffle their feathers, would he? They might get angry and go on a tear. What’s more, while the lumpen marched uptown to picket the homes of some of NYC’s wealthiest residents earlier this week, they passed over hizzoner’s townhouse and George Soros’s pad... Meanwhile, over at the Washington Post two of their worthies, Krauthammer and Gerson, have weighed in.

Krauthammer: “Obama is too intelligent not to know what he started. But so long as it gives him a shot at reelection, he shows no sign of caring.”

Gerson: “We are being asked to reelect a political figure who no longer exists.”

"We are being asked to reelect a political figure who no longer exists."