This morning the Arizona Daily Star published an exclusive interview with Sheriff Paul Babeu of Pinal County. Babeu's department has been on the front lines of the carnage wrought by open borders, the civil war raging in Mexico and the ATF's bizarre "Gunwalker" program that sent military-style weapons to the drug cartels. 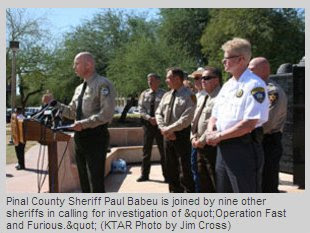 Q: When you says that those officials who carried out Fast & Furious should be considered accomplices or accessories to murder, are you serious, or is that a rhetorical point, that they could be charged? If serious, who in the ATF/DOJ chain of command should be investigated as possible accomplices or accessories to murder and other crimes? The line agents? Their supervisors? The U.S. Attorney's Office or Justice Department officials involved?

A: The American people deserve a thorough, impartial, and independent review of what happened here. Nothing short of that will ever be acceptable. The Justice Department has a serious conflict of interest in policing itself... This is why the Sheriffs of Arizona both Republicans and Democrats are demanding a Special Counsel to investigate Attorney General Eric Holder and the Department of Justice for their roles in Operation Fast and Furious...

...those responsible should be held criminally accountable for allowing 2,000 guns including assault weapons and 50 caliber rifles to be purchased on U.S. Soil and then turned over to the drug cartels of Mexico. As a result of their reckless facilitation and distribution of these weapons, our deputies and American citizens may now face the barrel of a gun that was placed in the hands of criminals by [ATF] and Attorney General Eric Holder. Citizens of the United States and Mexico have already been murdered by cartel members who now posses these weapons. There is no doubt more bloodshed will occur on both sides of the border, since over 1,500 weapons still remain unaccounted for...

Q: You have said repeatedly that you think Operation Fast and Furious was designed to lead to gun-control measures. What evidence of this have you seen? How can I find it?

A: This administration has repeatedly stated in the media that “90% of the weapons used to commit crimes in Mexico come from the United States.” They have used this argument in their support of tougher gun control measures. If you google search the quoted information, you will see numerous stories about it. Here is one such story link regarding the quote. 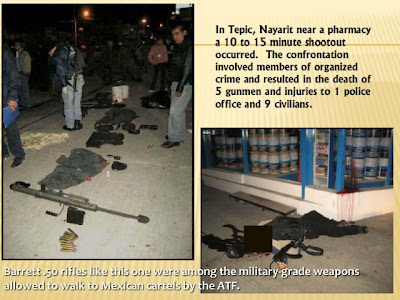 At the same time they are stating this, our own Federal government was using taxpayer money from the stimulus to purchase automatic weapons and sell them directly to the most dangerous criminals in North America... The firearm dealers in these cases flagged the purchases and reported them to the Federal government, who then ordered them to make the sale anyway.

A: If you knew that a foreign power had caused over 2,000 guns to arrive in the hands of America's most dangerous criminals, what would you say? What if those weapons had been used to commit more than 200 murders?

Now consider that the Federal government did just that--and to an ally. Nobody died because of Watergate and no treaties were violated. People on both sides of the border will be dealing with the deadly fallout for years to come. But before this is over, we'll know exactly what Barack Obama knew--and when he knew it.

...Fast and Furious quickly proved to be a catastrophe, but the public didn't learn about it until Agent Brian Terry was murdered on American soil. Since then, whistleblowers have been punished, those responsible have been promoted, scapegoats have been offered, and inconsistent testimony provided to Congress. This is a textbook attempt at obstruction by the Federal government. 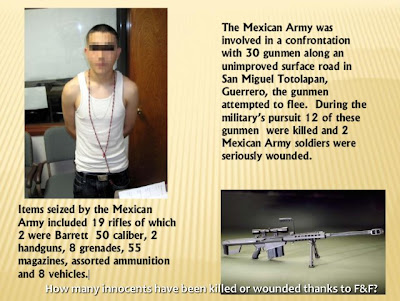 The family of U.S. Border Patrol Agent Brian Terry reached out to me after his murder. I have promised them, that I will continue to demand justice...

...On September 20th, 2011 the Chairman of the House Oversight Committee Darrell Issa, reported to media that the Attorney General in Mexico has said at least 200 murders south of the border happened as a result of Operation Fast and Furious. Eleven crimes in the United States have been linked to [it] up to this point.

...Project Gunrunner received "directly allocated" stimulus funds. It is our understanding that Operation Fast and Furious was tucked under Project Gunrunner, essentially using the same funding...

Issa has also done several interviews where he has stated, “U.S. dollars were used in at least some part to buy weapons.” Below is a link to a Fox News Story on the topic as well. As you will read, ATF Agent John Dodson was ordered to buy weapons and later sell them to known illegal buyers.

Please don't concern yourself with the hundreds of murders and the 1,500 weapons that remain unaccounted for; this is not a scandal according to America's finest journalist, Jonathan Alter.

If you want to be heartened and get a good laugh at the same time-- read the comments to Alters artcle in Bloomberg. 1337 so far and at least 90% rip Alter a new one and many give detailed run downs of the many Obama scandals, but some are just so witty and exasperated that you can't help but to LOL.

It is pretty darn simple. Stand back a speck, squint yours eyes a bit: The only thing these traitors, aka ruling elites, are scared of is the guns we own and the 2nd amendment.

Is there any other reason for them to invest such enormous political capitol, involving the high risk of so many of their ilk inside and out the inner circle of their organized high treason, so many knowing what the strategy and tactics instituted for the singular purpose eventually creating the ruse of a narrative and political justification of disarming the citizenry so they won't end up with a patriots bullet through their heads due to the tyranny they are hell bent on imposing on better than 300 million people?
Now tell me different and I have some ocean front property to sell you in Arizona.

The scope of the lawless disregard for The Rule of Law expands exponentially by the day by the very nature of corruption of the elites lust to retain absolute power.

Remember, Hitler said it best:
"It is convenient to have a system of laws where everyone is a criminal."

Don't worry, Hugh Hewitt will have Alder on his RINO Deluxe radio show with pee-lunty of opportunity to essplain hisself
MM