Germany and the End of the Euro

A commenter ("AbelCatalyst") on ZeroHedge offers the following theory concerning Germany and the Euro:

The following “Black Swan” theory is quite plausible, yet, very few have really discussed it because it feels too “out there,” which makes it the perfect Black Swan event.

The Black Swan Theory: Germany is about to go back to the Mark and there are overwhelmingly compelling reasons for Germany to do so:

1. Germany has a ton of debt, close to 80% of GDP, which they can inflate away without experiencing the chaos of hyperinflation 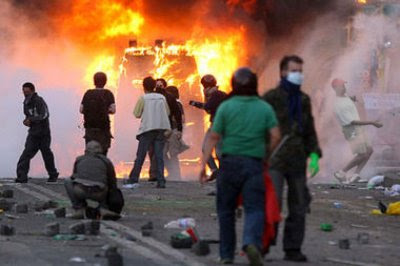 As in the US and most developed countries, the only way the debt is going away is either by default or inflation. Germany has a very unique opportunity as they can inflate away their debt and not experience the consequences of hyperinflation. Think about this for a moment. If Germany drops out of the Euro, then that currency goes into a death spiral while the Mark increases in value. All of their debt is in Euros so they can say bye-bye to their mountain of debt almost immediately. This is a unique opportunity for Germany at a very critical moment in time. It may not be wise to underestimate the power of self preservation. This is why German continues to appear to play nice, but is doing absolutely nothing (see German Endgame below).

2. Germany is deathly afraid of hyperinflation, but knows it needs inflation to wipe out it’s debt

As with almost every other developed country, inflation is needed, but the consequences are severe and civil unrest would surly follow. Most countries are between a rock and a hard place – no painless solution exists. However, Germany has the perfect solution looking them in the face. They can experience all the benefits of hyperinflation, while pushing the pain onto their neighbors. Again, this is a situation that is unique only to Germany because they are singlehandedly holding up the Euro while having all their debt in Euros. The pull to go back to the Mark must feel incredibly tempting, and I’m not sure they can resist.

3. Germany MUST keep their AAA rating

If Germany stays with the Euro they will lose their AAA rating, and their current debt will become totally unmanageable (just like every other developed nation). The difference is Germany has the unique opportunity to print Marks and inflate their debt away with virtually no negative consequences.

4. The benefit of being in the Euro is quickly coming to a close

Germany has been the number one beneficiary of the Euro as they let PIIGS nations borrow at low rates to buy their exports. While Germany’s exports and economy has done well, the catalyst for growth has been debt. This is the same for all developed, debtor nations; however, Germany has a very unique exit strategy. As it relates to this theory, many of the benefits to being in the Euro is quickly diminishing, which makes Germany’s exit from the Euro far more compelling at the present time.

The Endgame for Germany 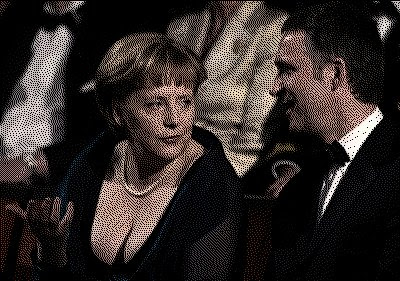 The Endgame is easy for Germany. The Euro needs to fall apart before they can make their move so they’re just sitting back and waiting patiently for the opportunity. If Greece goes bankrupt and the dominoes begin to fall, watch for Germany to go back to the Mark.

The strategy is obvious: Germany simply appears to be supporting the Euro as aggressively as possible without taking any actual action. Does this sound familiar? Float roomers, suck up to the French, agree to bailouts as long as there is a long list of strings, have their high court subtly undermine Germany’s participation in bailouts, and sit back and wait for the collapse. It’s important to understand that it is in Germany’s best interest for the Euro to fall apart because they will end up with the strongest currency with virtually no debt.

I’m not sure why people have not seen this, but it seems fairly obvious. Each country will ultimately act in their own best interest when the SHTF and this will be the best option for Germany – is there any doubt? What country in such a unique situation would not do the same? Do you think the US would do this if presented with the opportunity? You bet they would!

If you look at all the evidence through the lens of this Black Swan Theory, then all the recent actions (or lack thereof) begin to make perfect sense! And as a final note, a recent very credible source said that Germany is already in the process of printing Marks!

When it comes to the tangled spaghetti-wiring that is the Eurozone, the concept of an "orderly default" strikes me as an oxymoron.

at 9:21 PM
Email ThisBlogThis!Share to TwitterShare to FacebookShare to Pinterest
Labels: Economy, World

The Bundesbank has been printing Deutschmarks and stockpiling them for about a year.

In doing this it would be very easy for them to go back to the Deutschmark-they could have them in every bank in Germany within 48 hours. By 'easy' I mean that there would be enough cash on hand for everyone in Germany to be able to exchange their Euros for Deutschmarks.

The hard part will be establishing an exchange rate for them vs. the Euro and other currencies. Then how to do the exchange in such a way that the German people are not being wiped out financially by that exchange rate.

I would also guess that they would have to have some mechanisms in place to keep everybody from rushing across the German border to exchange their increasingly worthless Euros for Deutschmarks because if the Germans drop the Euro it will become about as worthless as a Wiemar Republic Mark or a Zimbabwe Dollar.

Seeing as the Germans have been doing this for over a year I would imagine they have (hopefully) thought it out and have everything ready to go.

Anyhoo... Here is some nice hot Popcorn, hun. Get ready to watch the floor show-if the Germans bail out of the Euro it will make what is happening in Greece and Italy look like the daily parade at Disneyworld!

You do know about the National EAS test on November 9th? This is something that has never been done before and the test originates from the White House.....

Does this mean that my old Marks will be good again???

Angela Merkel has some serious boobage goin on. So, yeah, they will do whats best for Germany.