Gee, a range of 32 miles in electric mode and 20 mpg on gasoline doesn't strike me as especially... eh, helpful:

Fisker's Karma extended-range EV just received its official certification from the EPA, but the numbers aren't exactly what the company hoped for. 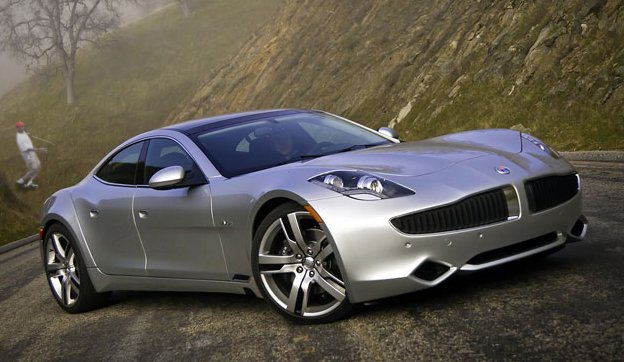 While Fisker had predicted a rating of 67 mpge and an all-electric range of 50 miles, the EPA disagreed, certifying the car with 52 mpge, a range of 32 miles, and 20 mpg in gasoline mode after that. Ouch.

Of course, the affordable price makes up for it: 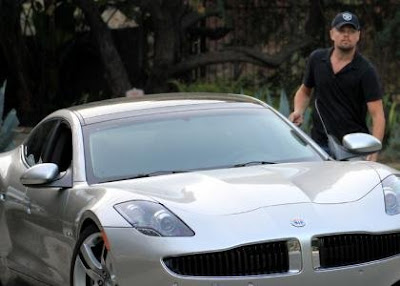 Our tax dollars at work… a half-billion dollar loan (actually $529 million) from the U.S. Department of Energy to develop a hybrid toy for the wealthy and/or celebri-licious (like Leonardo DiCaprio, one of the first customers) that, in real world driving, won’t get much better mileage than your average crossover utility vehicle. Not only that, but the cars are manufactured in Finland — that’s right, Finland – and shipped here for sale, where their purchasers will then receive a $7,500 tax credit for buying one (the “cheap” base model starts at $96,895, with the full-zoot Eco Chic model going for a bargain $108,900).

...the Federal government [was] a major financial partner in Fisker Automotive... We the taxpayers are on the hook for more than half a billion dollars, about the same amount that got loaned to Solyndra, another “green manufacturer,” before they went bankrupt. At least Solyndra was manufacturing their products in this country, providing American manufacturing jobs (if short-lived jobs), and making a product that average Americans could conceivably afford. Fisker is manufacturing these gorgeous Leonardo DiCaprio toys in Finland. And the kicker, for those of you who would still claim that the risk of half a billion tax dollars is justified by environmental gains… contrary to the company’s initial hype, the Karma will only run for thirty-two miles on its electric motors before its turbocharged gasoline engine needs to kick in (as opposed to the initial estimate of fifty miles). Once that occurs, the Karma gets about the same mileage as a Ford Explorer. Not the new Explorer, even. The older, gas-hog, body-on-frame model. We’re talking twenty miles per gallon, folks. So much for your “green investment.”

...Al Gore is on the list of customers waiting to receive their Fisker Karmas, having put in his order before the DOE signed off on the company’s half-billion dollar loan. Oh, and by the way, it just so happens that several major investors in the company are also major donors to the Democratic Party. And here’s information on John Doerr, an advisor to President Obama who is also a major investor in Fisker Automotive. Can you say, “crony capitalism?”

Our children and grandchildren will pay for this green scam with interest.

I wonder how many billions have been laundered from the taxpayers to President Obama's contributors under the banner of "green jobs"?

wonderful to know that taxpayers are subsidizing Leo's flashy car....NOT

I wonder if I google "average commuter distance" if the first result I get will exactly match that 32 mile range...