Former NSA head Michael Hayden recently joined a chorus of Trump’s critics blasting him for offending Muslims. “The jihadist narrative is that there is undying enmity between Islam and the modern world, so when Trump says they all hate us, he’s using their narrative," he said.

That’s true. It’s also meaningless because in this case the narrative is reality.

Jihadists do hate us. Islam has viewed the rest of the world with undying enmity for over a thousand years. Some might quibble over whether a 7th century obsession really counts as “undying”, but it’s a whole lot older than Hayden, the United States of America, our entire language and much of our civilization.

The White House is extremely fond of narratives. The past month featured Ben Rhodes, Obama’s foreign policy guru, taking a victory lap for successfully pushing his “narrative” on the Iran deal. Rhodes takes pride in his narratives. His media allies love narratives. But none of the narratives change the fact that Iran is moving closer to getting a nuclear bomb. Narratives don’t change reality. They’re a delusion.

Narratives only work on the people you fool. They don’t remove the underlying danger. All they do is postpone the ultimate recognition of the problem with catastrophic results.

Islamic terrorism is a reality. Erase all the narratives and the fact of its existence remains. 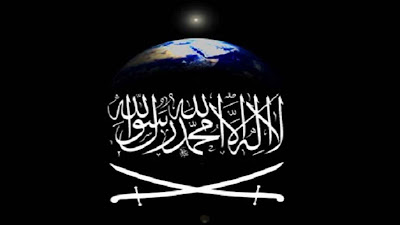 So far they have fought reality to a draw. Ten thousand Americans are dead at the hands of Islamic terrorists and Muslim migration to America has doubled. Islamic terrorists are carving out their own countries and our leaders are focused on defeating their “narratives” on social media.

Hayden repeats the familiar nonsense that recognizing reality plays into the enemy narrative. And then the only way to defeat Islamic terrorism is by refusing to recognize its existence out of fear that we might play into its narrative. But Islamic terrorism doesn’t go away when you stop believing in it.

You don’t have to believe in a bomb or a bullet for it to kill you. A plane headed for your office building or a machete at your neck is not a narrative, it is reality. If we can’t tell the difference between reality and what we believe, then reality will kill us. And nothing we believe will change that.

We are not fighting a war of narratives with Islam. This is a war of bombs and bullets, planes crashing into buildings and blades digging into necks. And yet the men in charge of fighting this war remain obsessed with winning a battle of narratives inside the Muslim world. They have no plans for winning the war. Instead they are occupied with managing the intensity of the conflict, taking out the occasional terrorist leader, bombing only when a jihadist group like ISIS has become too powerful, while waiting for their moderate Muslim allies to win the war of narratives for them by discrediting the jihadists.

The narrative mistake is understandable. The left remains convinced that it can get its way through propaganda. Its record is certainly impressive. But it’s strictly a domestic record. Getting Americans to believe seven strictly irrational social justice things before breakfast is very different than convincing the members of a devout tribal society with a deep sense of history that they really don’t want to kill Americans. All that the narrative war accomplished was to show that the propagandists who convinced Americans to vote for their own exploitation have no idea how to even begin convincing Muslims to do anything. Think Again Turn Away was an embarrassment. Various outreach efforts failed miserably. American politicians devoutly apologize for any disrespect to Islam, but Muslims don’t care.

Hayden isn’t wrong that there is a narrative. But Nazism also had a narrative. Once the Nazis had power, they began acting on it and their narrative became a reality that had to be stopped by armed force. But at a deeper level he is wrong because he isn’t reciting the Islamic or even the jihadist narrative, but a deceptive narrative aimed at us in order to block recognition of the problem of Islamic terrorism.

The Islamic narrative isn’t just that we hate them. More importantly, it’s that they hate us. Muslim terrorists are not passively reacting to us. They carry a hatred that is far older than our country. That hatred is encoded in the holy books of Islam. But that hatred is only a means to an end.

Hatred is the means. Conquest is the end.

Assuming that Muslims are oppressed minorities is a profound intellectual error crippling our ability to defend ourselves. Islamic terrorism is not an anti-colonial movement, but a colonial one. ISIS and its Islamic ilk are not oppressed minorities, but oppressive majorities. Islamic terror does not react to us, as men like Hayden insist. Instead we react to Islam. And our obsession with playing into enemy narratives is a typically reactive response. Rising forces generate their own narratives. Politically defeated movements typically obsess about not making things worse by playing into the narratives that their enemies have spread about them. That is why Republicans panic over any accusation of racism. Or why the vanilla center of the pro-Israel movement winces every time Israel shoots a terrorist.

Western leaders claim to be fighting narratives, but they have no interest in actually challenging the Islamic narrative of superiority that is the root cause of this conflict. Instead they take great pains not to offend Muslims. This does not challenge the Islamic supremacist narrative, instead it affirms it.

The “moderate” Muslim majority who are our only hope for stopping Islamic terrorism is an enemy narrative manufactured and distributed by an Islamic supremacist organization. When we repeat it, we distort our strategy and our thinking in ways that allow us to be manipulated and controlled.

It isn’t Trump who is playing into jihadist narratives, but Hayden and everyone who claims that recognizing Islamic terrorism plays into enemy narratives while failing to recognize that what they are saying is an enemy narrative.

The very notion that the good opinion of the enemy should constrain our military operations, our thinking and even our ability to recognize reality is an enemy narrative of unprecedented effect.

And this is the narrative that our leaders and the leaders of the world have knelt in submission to.

Narratives only have the power that we assign to them. No narrative is stronger than reality unless we believe in it. Not only have our leaders chosen to play into the enemy narrative, but they have accepted its premise as the only way to win. And so they are bound to lose until they break out of the narrative.

Well said! And of course the only person running for office that acknowledges this truth is Donald Trump.

God help us if Trump is not elected!