What Hillary Did Just Before Vince Foster Killed Himself

Hillary Clinton relentlessly browbeat her clinically depressed former law partner Vince Foster shortly before he committed suicide in 1993, according to notes from a final jailhouse interview with a former close business partner of the Clintons, the Free Beacon reports.

Jim McDougal, a close confidant of the Clintons for many years, said in a final interview before he died that Hillary had a “hard, difficult personality” and was “riding [Vince Foster] every minute” about Whitewater before Foster took his own life.

He called Bill a “master con artist” who wed Hillary after a “cold-blooded search” to find a politically beneficial wife. Mcdougall said Bill wanted to keep Hilary from succeeding in her own political career.

“I think it was a cold-blooded search by both of them [Bill Clinton and former Arkansas Governor Jim Guy Tucker] to find political wives,” said McDougal. “Important who to choose, still hungover from the 60s and both looking for good credentials to back them up.”

“Hillary had credentials to clean up after Bill, he thought she’d keep him organized,” he said. “The truth is that [Bill’s former aide] Betsey Wright was the one who got him organized for his comeback.” 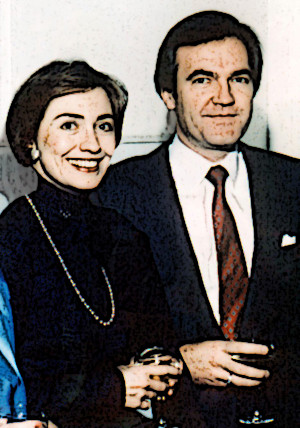 McDougal was a central figure in the Whitewater scandal and convicted of fraud in 1996 in connection to the controversial real estate partnership with the Clintons. He died in 1998 of a heart attack.

“When I saw Vince Foster to put Clintons out of Whitewater, he was clearly depressed, a clinical thing. He was star[t]ing conversation talking about aging, eyesight going, asked me to sign something,” said McDougal.

“Then Vince Foster committed suicide,” continued McDougal. “He had so much of their shit on his head and Hillary was riding him every minute.”

Foster, one of Hillary Clinton’s closest friends and advisers, was found dead from a self-inflicted gunshot wound in a Virginia park in 1993. He had been depressed and struggling to shield the Clintons from legal fallout over Whitewater.

The FBI looked into Foster’s death in 1993 and concluded that Hillary Clinton “triggered” Foster’s decision to take his own life after she publicly humiliated him during a White House meeting.

“Foster was profoundly depressed, but Hillary lambasting him was the final straw because she publicly embarrassed him in front of others,” Jim Clemente, a senior FBI investigator on the probe, told investigative reporter Ron Kessler.

After Foster’s death, files related to the Clintons’ investments were removed from his White House office.

They probably landed in her paper shredder.

McDougal’s ex-wife, Susan McDougal, was convicted of contempt of court in 1996 for refusing to answer questions about the Clintons and Whitewater in front of a grand jury. She received a full presidential pardon from Bill right before he left office.

McDougal also described Hillary as “generally a pain in the ass” and “very difficult for everyone, including Bill.” He said Bill seemed to privately enjoy the Whitewater scandal because it was damaging to Hillary’s future political career.

“She had a hard, difficult personality and it got truly released,” said McDougal. “When Bill got to be his own man again, I could see it starts up agains [sic].”

“I think Bill may actually like Whitewater because it makes certain it denies Hillary a position of honor and power in country [sic],” he added.

At the time of McDougal’s death he was still cooperating with federal prosecutors on their investigation of the Clintons’ involvement with the Whitewater real estate venture. The Clintons were never charged.

The controversy stemmed from the 1970s, when McDougal and his wife partnered with the Clintons to purchase a large tract of land in the Arkansas Ozarks. The unsuccessful investment became a national scandal decades later, after the New York Times reported on evidence of impropriety related to the deal.

A central question in the case was whether Bill Clinton used his political influence to help obtain a fraudulent federal loan for the McDougals. There were also accusations of kickbacks related to Hillary Clinton’s alleged legal work on behalf of the McDougals’ bank, Madison Guaranty Savings and Loan.

McDougal gave a candid, first-hand account of the controversy in his book Arkansas Mischief, written with Wilkie. He argued that the Clintons knowingly broke the law in Whitewater and other deals, repeatedly lied under oath, and accepted bribes while in Arkansas. He also claimed Bill and his ex-wife, Susan, had a long-standing affair that began during their marriage, free beacon reported.

McDougal’s friend and fellow prisoner Darren Wesley Williams wrote to the editor of the now-defunct George Magazine about how he liked Jim, who made him laugh. The guards were negligent he said in giving him his medication.

“In the T.V. room he’d have his arm slung over another chair,” Williams added. “If someone came up and asked to sit there he’d say, ‘no, I’m saving this for Bill.’”

Maybe there’s room for Hillary too.