Help us Obi Wan Romney, you're our only hope!

Jay Cost, a writer for the Weekly "NeverTrump" Standard, penned an article begging Mitt Romney to run for president as an independent candidate in 2016.

According to Mr. Cost, at this critical juncture in our nation's history, the country needs not a Washington, Jefferson or a Lincoln, but - brace yourself - a Martin van Buren.

Well, if it is a Martin van Buren you are seeking, then I guess Mitt Romney is your guy; a man who lost the Republican nomination to John McCain in 2008 and, after securing the nomination in 2012, proceeded to lose an eminently winnable election against a feeble Barack Obama, only by exceeding that feebleness, running a campaign of monumental timidity.

If Donald Trump describes himself as a counter-puncher, Romney can aptly be labeled as the Democrat Party designated punching bag.

Mr. Cost defines America as not bound by a shared nationality, religion, or even geography, but a commitment to certain ideals-that all people are created equal, endowed by God with inalienable rights, and that government is instituted to secure these blessings. 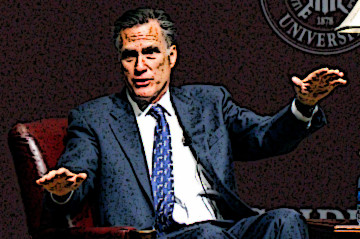 He says that Neither Trump nor Hillary Clinton is committed to the republican tradition of government of the people, by the people, and for all the people.

Well, Mr. Cost, neither has our de facto one-party government, to which you seem devoted, recommending the problem as the solution.

As elegantly expressed by Angelo Codevilla, country club Republicans have joined the Democrat Party ruling class to form an oligarchy, a form of government in which all power is vested in a few persons or in a dominant class or clique; the Democrat and Republican establishments, the media and their financiers, who every four years hire a President.

The United States already has a bona fide ruling class that transcends government, sees itself as distinct from the rest of society and as the only element that may act on its behalf. The ruling class considers those who resist it as having no moral or intellectual right, and, only reluctantly, any civil right to do so.

Republican leaders neither contest that view nor vilify their Democrat counterparts because they do not want to challenge the ruling class, they want to join it. The GOP leadership has gradually solidified its choice to no longer represent what had been its constituency, but to adopt the identity of junior partners in the ruling class. By repeatedly passing bills that contradict the views of Republican voters, the leadership has made political orphans of millions of Americans, while Republican leaders increasingly represent only themselves.

The differences between the Bushes, Clintons, Obamas and, yes, Mitt Romney are of degree, not kind.

What our elected representatives and their appointees have conveniently forgotten is that the federal government is entirely a creature of the Constitution. It is a government of delegated powers, possessing no authority not expressly or by implication granted to it by the instrument that created it (Albert H. Putney. "United States Constitution, State Constitutions, Statutory Law." 1910).

The efficiency and effectiveness of government, therefore, are directly dependent upon the trustworthiness of government officials as representatives and executors of the views and desires of the people.

In other words, whenever the interests of government officials divert from or are in conflict with those of the people, tyranny ensues.

Today the federal government has become an entity unto itself operating outside of Constitutional constraints and unaccountable to the American people.

The 2016 election is not a contest between Democrat and Republican candidates or liberals and conservatives, but a battle between the entrenched power of a bipartisan political-media establishment versus the rights and liberties of the American people.

Revealing the extent and depth of the endemic corruption in Washington, D.C. is the first, essential step toward restoring the Constitution and the rule of law.

Perhaps that is the "intemperance" the establishment really fears.

The people have already spoken and they feel it is time for Donald J. Trump to be the next president. The fat lady, Hillary, will not be singing, she will probably be shedding a few tears after the general election.