JAG EXPERT: FBI Director Comey Has Delayed the Hillary Investigation "For Too Long"

The media continue their focus on accusing presumptive Republican presidential nominee Donald Trump of racist rhetoric, and facilitating the circular firing squad that some in the Republican Party and conservative movement are only too happy to take part in. Reporters continue to publish story after story damaging to Republicans, salivating over whatever Republican disunity they can unearth, and calling for Republicans to disavow Trump’s actions.

But in doing so they are hoping to protect Hillary Clinton and the Democratic Party, and the issue of whether or not its presumptive nominee will face criminal charges. The Obama administration has now admitted that the Federal Bureau of Investigation is conducting a “criminal” investigation into the activities of presidential candidate Hillary Clinton, who used a private email server to send and receive classified information and has demonstrated a pattern of corrupt behavior while secretary of state. 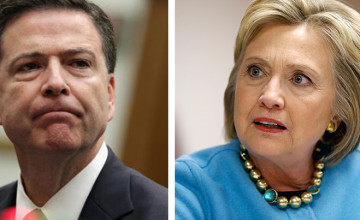 Earnest maintained that the civil servants at the FBI “aren’t going to be swayed by political forces” when conducting the investigation. But, surely, these civil servants will notice the direction of the political winds.

President Obama held a meeting with Department of Justice Attorney General Loretta Lynch shortly after his endorsement of Hillary. If FBI Director James Comey were to refer his investigation to Lynch, the Attorney General would have the power to not pursue the case.

“In order for Clinton to carry Obama’s torch, she has to stay out of prison,” writes Katie Pavlich for Townhall. “In order to do that, she has to avoid prosecution. I’m sure Obama made that very clear to his somewhat new Attorney General.”

We have regularly cited the various scandals still hanging over Mrs. Clinton’s head. They include the mishandling of classified materials, obstruction of justice, the public corruption scandal in which she used the State Department as leverage for benefitting the Clinton Foundation as well as her family, and Benghazi.

Contrary to President Obama’s assertion that he is allowing a non-partisan and full investigation, by endorsing Mrs. Clinton he has placed his hand on the scale of justice and made his wishes more than clear to federal investigators. The question is, will Director Comey and the FBI follow the President’s direction?

Despite the administration’s continued support for Clinton, new stories break daily outlining Mrs. Clinton’s corruption and pay-for-play. ABC News, with the help of Citizens United, found that a Clinton donor was placed on a sensitive intelligence board during Mrs. Clinton’s term as secretary of state—even though he lacked the credentials for the appointment.

The Wall Street Journal also reports that “many” of the 22 classified emails from Mrs. Clinton’s private email server that the government refuses to release, “dealt with whether diplomats concurred or not with the CIA drone strikes…” These highly sensitive and classified emails were “written within the often-narrow time frame in which State Department officials had to decide whether or not to object to drone strikes before the CIA pulled the trigger…” There are more than 2,000 emails that Mrs. Clinton handled that contained classified material on her private, unsecured server, whether marked as such or not.

“Several law-enforcement officials said they don’t expect any criminal charges to be filed as a result of the investigation,” reports the Journal, continuing, “although a final review of the evidence will be made only after an expected FBI interview with Mrs. Clinton this summer.”

Jonathan F. Keiler, a lawyer and former captain in the Army’s Judge-Advocate General Corps, writes that Comey has already delayed for too long. In an outstanding column for American Thinker, he wonders what Comey is up to: “What FBI director James Comey intends is perhaps the greatest conundrum in Washington these days. Is he playing Hamlet to Hillary’s Claudius, introspective, doubtful, and unwilling to strike the killing blow? Is he just being a careful apolitical policeman? Or is he a political hack who will do what’s best for Jim Comey? Perhaps it’s a bit of all three. Whatever the truth, it is in Hillary’s best interest to discourage Comey as much as possible. Her early claim to be the Democrat nominee serves that purpose.”

Keiler argues that Hillary’s convenient surge past the magic delegate number the night before the California primary, through a sudden burst of superdelegate declarations, served both her political and legal purposes. “If Comey is an honest policeman,” he writes, “the best time for him to have acted was before Hillary claimed the nomination. Then he would only have been referring charges against another—albeit notorious—private citizen. After the nomination, Hillary becomes not only the standard bearer of one of America’s two great political parties, but a ‘historic’ figure as the first woman to do so. As such, it behooved both Hillary and her backers in the media to reach that point ASAP.”

“As a political and media matter,” he adds, “an FBI referral at this point will be against not only the Democratic Party’s presidential nominee, but also a historic figure, an affront to the American political system and women everywhere.”

The evidence against Mrs. Clinton is clear. If Director Comey finds no evidence of criminal activity by Mrs. Clinton, he will lose his reputation as a straight shooter. Either way, at this point, it will be viewed as a political act. If the Attorney General and President Obama stymie an investigation through political interference, Director Comey could, and should, go public. There might even be a revolt within the FBI. Whether or not that happens, Hillary Clinton’s fate is now quite clearly in Director Comey’s hands.

Comey is Barry's huckleberry.
Spooning is a fine past time.

HItlery is still a private citizen