The Orlando Massacre Is Just the Beginning

What is the greatest lesson of the Orlando massacre, where a Muslim shooter killed at least 50 people at a homosexual night club—an event that is now considered the deadliest terrorist attack on U.S. soil since the September 11 attacks of 2001?  It’s that such an attack had to happen—and is destined to happen again.  Why?  Because the surest way of seeing an act occur repeatedly—say a terrorist attack—is to repeat all the same steps that precipitated and paved the way for it in the first place.

Consider: the shooter, Omar Mir Seddique Mateen, was “quite religious” and a pious Muslim (he attended mosque and prayed regularly); he clearly saw himself as a jihadi killing evildoers—he “recited prayers to Allah during the attack,” pledged this act to the Islamic State, and the latter claimed it—officialdom, as usual, is trying to obfuscate the Islamic role.

Despite all of the above and the fact that ISIS has repeatedly executed homosexuals, often videotaping it (see here), “FBI Special Agent Ron Hopper said the bureau was still working to determine whether sexual orientation was a motive in the Orlando attack.” 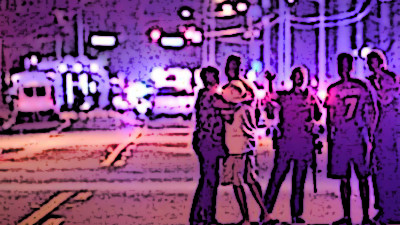 President Obama said what he often says after a Muslim goes on a rampage in the name of Islam: it’s still too early to know the “precise motivations of the killer.”   Instead, Obama exploited the jihadi massacre as a springboard for his own gun-ban agenda, saying that access to “very powerful weapons very quickly” is “a problem regardless of their motivations.”

Still others are going as far as to blame this jihadi attack on American Christians and conservatives: “You know what is gross — your thoughts and prayers and Islamophobia after you created this anti-queer climate,” ACLU staff attorney Chase Strangio tweeted.

Then there’s the deliberate incompetence: Obama’s own purge of training materials and language deemed “hurtful” to Muslims is being cited as partially responsible for the FBI dropping the ball—so that the FBI would never “ever have guessed a LGBT club [would] be a target of an terrorist attack” Mateen was even on the FBI’s radar as a “person of interest” in 2013 and 2014—yet was free to buy guns and go on a murderous rampage in 2016.

Indeed, in this case at least, it appears that Islamophobia trumped homophobia: “Gilroy, a former Fort Pierce police officer, said Mateen frequently made homophobic and racial comments. Gilroy said he complained to his employer several times but it did nothing because he was Muslim.”

Finally, as with every Islamic terror attack on U.S. soil, the media is again warning against that notorious wave of “reprisals” against the Muslim community that never manifests. (For an idea of what “reprisals” against non-Muslims in Muslim majority nations look like, click here and here).   Florida officials were quick to invite a Muslim cleric to address the media and “preempt a possible backlash against the Muslim community” (as opposed to the other Muslim cleric who openly taught in Orlando that Islam commands the execution of homosexuals).   The Guardian “courageously” proclaimed, “Let's not give in to fear after the Orlando shooting.”

Similarly, the head of the Jewish LGBTQ group, who expressed fears of a backlash against Muslims, redundantly pointed out that  “We should remember not to blame all members of any other religion or political ideology for what one person does”—an admonition that fails to address who or what we should blame when countless upon countless members of one religion constantly and always engage in violent behavior.

To the careful observer, all of these reactions from liberals, leftist media, and the Obama administration are par for the course whenever a jihadi terror attack occurs on American soil: stout denial of any connection between the attack in question and Islamic teachings; cynically exploiting the attack to demonize conservatives, gun advocates, and “homophobic” Christians; and cries that any scrutiny into Islam is tantamount to a “backlash” against Muslims.

And it’s because all these reactions are standard that many more Islamic terrorist attacks are destined to occur on American soil.