On MSNBC’s “Morning Joe” Joe Scarborough, Mika Brzezinski, and Jon Meacham all expressed their outrage over Hillary Clinton’s handling of the Benghazi terrorist attacks. This discussion came on the heels of the House GOP releasing its report on Benghazi, which was praised by the panel as “fair-minded” and “independent.”

Brzezinski said of Clinton’s handling of the terrorist attacks, “I feel like we lost an ambassador, we lost precious lives. Maybe that should have been the first thing that she said. “ 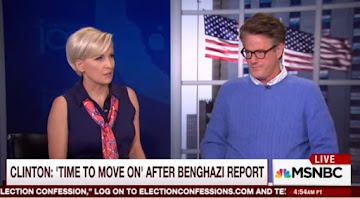 SCARBOROUGH: I think — I’m sure she wishes she could take that back. I think the bigger problem is that for Hillary Clinton is that Trey Gowdy actually did what people said Trey Gowdy would do. After fits and starts and after stupid fundraising letter from Republicans, and stupid press conferences from Republicans, and after stupid political overreaches from Republicans. Trey Gowdy actually delivered a congressional report that has fair-minded, independent Americans stopping and going, wait a second, Hillary Clinton and Barack Obama, and our foreign policy apparatus responded that way while American’s lives were on the line, while a U.S. Ambassador’s life was on the line? I actually think that it’s time to move on actually doesn’t work now. If it had been another hatchet job, another witch hunt Jon Meacham , then I would be the first to say, come on, enough is enough. I’m tired of hearing about Benghazi. But when I hear what I heard from this, a lot of us are going, wait, what happened? How did this happen? How do we stop this from ever happening again?

Meacham added that it is “impossible for her [Clinton] to say the word Benghazi.”

This evil, whatever she is? (I can not bring myself to say human) has been ALLOWED to destroy
several lives and just keep going, between her and BILL is a long line of destruction. I have
been a Democrat all my life (I am now 65), but have been leaning towards TRUMP for several months,
will now change my party to Rep. SO SAD TO SEE WHAT HAS BECOME OF THIS GREAT NATION.

I am an independent....I donot vote party. I am and force myself to stay informed . I am an American . I love America. I believe the Constitution is one of the Greatest Documents ever written.....all that being said. Evil and Incompetence Must be confronted on both sides of the aisle.
.this is a case of Evil and Incompetence.

Gary Johnson is a great guy and a good candidate...when you are offered shit or shit by our systemically broken two party system, just say neither. It's not like voting matters anyway.