HILLARY AND OBAMA: The Hidden Forces Behind the Orlando ISIS Massacre

The media has desperately tried to blame anything and everything for the Orlando Muslim massacre. The bloodshed by a Muslim terrorist has been attributed to guns, homophobia, family problems and mental illness. By next week, the media may be blaming global warming and UFOs.

But Omar Mateen told his Facebook friends and a 911 operator exactly why he was doing it. Omar killed 49 people as part of the Islamic State’s war against America.

The motive is there in black and white. This was one of a number of ISIS attacks. The roots of the Orlando attack lie in Iraq forcing us to dig down into Obama’s disastrous mishandling of ISIS. Without understanding what went wrong in Iraq, we cannot understand what happened in Orlando.

Under Bush, Al Qaeda in Iraq had been on the run. Under Obama, it began overrunning the region.

In 2009, Obama vowed a “responsible” end to the Iraq War. He claimed that the “starting point for our policies must always be the safety of the American people”. But the safety of the American people was the first casualty of his foreign policy. In 2011, he hung up his own “Mission Accomplished” sign and boasted that “The long war in Iraq will come to an end by the end of this year.” It did not and would not.

Obama claimed that his withdrawal from Iraq and his invasion of Libya were both examples of successful policies. Both countries are now ISIS playgrounds. The “sovereign, stable and self-reliant” Iraq he told the country we were leaving behind was a myth. The new Libya was an equally imaginary and unreal place. ISIS gained power and influence as a result of that chaos. And it used that influence to kill Americans. 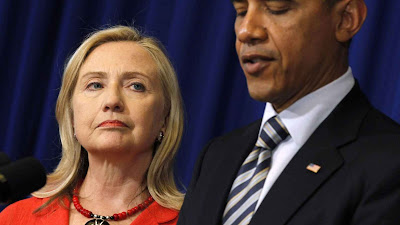 Today the battle for Fallujah is raging. When ISIS first took the city, Obama breezily dismissed them as a JayVee team.  He specifically insisted that ISIS posed no serious threat to America. “There is a distinction between the capacity and reach of a bin Laden and a network that is actively planning major terrorist plots against the homeland versus jihadists who are engaged in various local power struggles and disputes, often sectarian.”

“Fallujah is a profoundly conservative Sunni city… And how we think about terrorism has to be defined and specific enough that it doesn’t lead us to think that any horrible actions that take place around the world that are motivated in part by an extremist Islamic ideology are a direct threat to us,” he said.

It is now blatantly and indisputably obvious that ISIS is a direct threat to us. Orlando is yet another reminder of how deeply wrong Obama was about ISIS. Instead of taking action, Obama chose to ignore the expansion of ISIS until it had become a major threat. As a result of its victories, Al Qaeda in Iraq went from an Al Qaeda affiliate to declaring the Islamic State while commanding the allegiance of Muslims around the world. Omar Mateen was one of those Muslims.

If Obama had not dismissed ISIS early on, it would never have gained the level of support that it did. And the Orlando massacre might never have happened.

But Obama was not the only proudly neglectful parent of ISIS. The two key elements in the rise of ISIS were the withdrawal from Iraq and the Arab Spring. The withdrawal gave ISIS freedom of action in Iraq allowing it and its Shiite frenemies in Baghdad to roll back the stability of the Surge. The Arab Spring however destabilized the region so badly that ISIS was able to expand into countries like Syria and Libya. The migration of Jihadists into the region swelled its ranks enormously and turned it from a local problem into a global one.

And the Arab Spring was a project of Barack Obama and Hillary Clinton. Obama created space for ISIS in Iraq, but Hillary Clinton opened the door for the rise of ISIS in Libya and Syria. Together they helped make ISIS into a regional and then a global player.

Hillary Clinton tried to blame the “internet” for the Orlando attack. But Al Gore’s magical internet did not shoot 49 people in Orlando. For that matter it did not “radicalize” Omar Mateen.

Omar, like many other Muslims, was impressed by the ISIS victories that Hillary’s Islamic regime change project had made possible. He viewed these triumphs not as the result of a disastrous State Department and White House policy, but as proof of the religious authority of ISIS. Omar wanted to join the fight.

Muslim terrorism existed before ISIS. It will exist after ISIS. But there is no doubt that the Islamic State’s claim to having revived the Caliphate and its impressive string of victories against the Iraqi military convinced many Muslims that they were religiously obligated to follow its orders.

And these orders were quite explicit.

ISIS had called for attacks in America during Ramadan. “Hurt the Crusaders day and night without sleeping, and terrorize them so that the neighbor fears his neighbor,” ISIS had told Muslims in the US,

Omar answered the call in Orlando.

Attempting to blame fellow Americans for the actions of ISIS, as Obama has done by emphasizing gun control, only plays into the hands of the Muslim terror group behind the attack. The NRA did not carry out this attack. ISIS did. And ISIS benefited from Obama and Hillary’s foreign policy which allowed it to expand its reach and its popularity until its network of Muslim supporters could strike anywhere.

Obama and Hillary do not want to discuss the role that they played in creating the global conditions that led to the Orlando attack. It’s more convenient for them to blame it on Republicans by emphasizing gun control or homophobia, but discussing an ISIS attack without mentioning ISIS is like talking about WW2 without mentioning Nazi Germany. It’s intellectually dishonest and strategically senseless.

The Orlando massacre was not a local event, but a global one. It must be viewed within the context of a series of ISIS attacks in Europe and America. And ISIS became a global threat on Obama’s watch.

During these pivotal years, Hillary Clinton was the highest ranking foreign policy figure in the country. It is absurd for her to argue that she bears no responsibility for the rise of ISIS. And Hillary Clinton has even defended Obama over his “JayVee” dismissal of ISIS as a direct threat to America.

The Orlando massacre is yet another example of the consequences of Obama and Hillary’s foreign policy. It is not the first such consequence and it will not, by any means, be the last.

Read more at By FrontpageMag.com.

The entire Orlando cover-up is reminiscent of the Benghazi fiasco. Hiding from terrorism will not make it go away. It also should not help Hillary get elected, the way it did Obama in 2012.

Hillary and Obama are monsters. Their complete disregard for human life in their quests for money, power and CONTROL, are beyond unconscionable...they're EVIL.