Where are the articles of impeachment?

I have written many times about the problem in our prisons.  There's a basic principle in our justice system that once you serve your time you've paid your debt to society.  This is how it should be, and it should apply Yes, that means that when you get out and probation is done, .

No more firearms restrictions, no more anything.

If you can't keep playing post-hoc games and when you're wrong it's blatantly obvious why and who's to blame.  That in turn means that the public and should rise and that the person(s) responsible be held accountable -- fired without pensions if a negligence charge can be sustained.

A few years ago I wrote in the about a particular individual who shot a Marshal coming to serve a warrant on him.  His rap sheet included his first serious felony, carjacking (and resisting arrest), for which he went to prison.  He got out and then decided that was a good idea, and went to prison 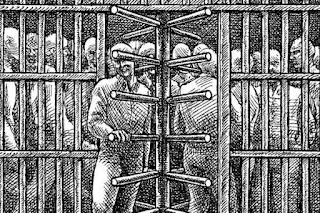 Subsequent to the release he shot the Marshal.

Of course everyone wants to know why he had a gun.

That Marshal should not be dead, but the indirect responsibility for it lies with involved in that jackwad being released the second time, and thus in a position to shoot somebody.

Now here it appears we have an imam who prosecutors was radicalizing people , they let him out, and...... the shooter in Orlando and he have been linked.

The gunman who murdered at least 50 people in a Florida nightclub early Sunday morning despite warnings from prosecutors that he would recruit people to carry out violent acts, sources told FoxNews.com.

That's right, we let gang leaders who like to rob banks out of prison

Are you freaking kidding me?

Folks, there is only  answer to this sort of crap since the government won't stop it:

It is  that so-called "law enforcement", "prosecutors" and "judges" do their jobs.  Nor will any other government agency

Oh by the way, that's the ID they used to get on the planes.

The reason the Second Amendment exists is so that in the gravest extreme, you can elect to have a fighting chance of living through the encounter.  The  means or device that works for this purpose on a reliable basis irrespective of your age, sex or physical prowess is a .

It is specifically because your right to be alive is  (that is, it exists prior to and independent of any political system) the government not only might not be able to to take sort of step to interdict that the responsibility for same does fall first on you, individually.

Governor Scott, I call upon you, and the other governors of states that do not have "Constitutional Carry",

"It is specifically because your right to be alive is pre-political..."
This is the best argument I have ever heard of as to why government does not have the right to place any sort of boundaries or limitations on the Second Amendment...contrary to what HRC--supposedly the smartest woman in the world--appears to be saying. Simple and very much to the point! Dr. Bill