UCLA PROVES ONCE AGAIN: Gun-free zones are magnets for murderers

You say someone violated a newly defined "gun-free zone" to shoot innocents at UCLA?

Economist-slash-statisticians Tim Groseclose and John Lott, Jr. explain (more patiently than I could) for the mentally defective and the Left, but I repeat myself.

The fatal shooting at UCLA wasn’t supposed to happen. Late last year, California passed a ban on people being able to carry a permitted concealed handgun on college campuses. California instituted the ban despite the previous rule being in effect for over 100 years without a single example of any problem.

Both of the authors here have taught at UCLA, and we don’t take these arguments lightly... The shooting last week at the campus engineering building took place only about 400 yards from the UCLA police station. But despite police being so important in stopping crime, this case again illustrated a simple fact: Police virtually always arrive on a crime scene after the crime occurs. 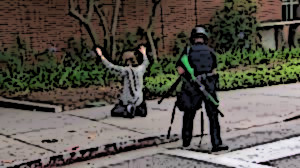 ...Since at least 1950, all but three public mass shootings in America have taken place where general citizens are [unconstitutionally] banned from carrying guns. In Europe, there have been no exceptions. Every mass public shooting has occurred in places where general citizens are not allowed to have guns. And Europe is no stranger to mass shootings, with a fatality rate virtually the same as that in the U.S...

...Those advocating gun-free zones argue that permit holders will accidentally shoot bystanders. Or that arriving police will shoot anyone with a gun, including the permit holders. At colleges, fears are raised that students will get drunk and misuse guns.

Out of the dozens of cases where concealed-carry holders have stopped shootings in malls, churches, schools, universities and busy downtowns, no permit holder has ever shot a bystander. Nor in these cases have the police ever accidentally shot a permit holder.

Gun-free zones are a magnet for murderers. Even the most ardent gun control advocate would never put “Gun-Free Zone” signs on their home. Let’s finally stop putting them elsewhere.