“Most ambitious and progressive platform our party has ever seen.”

Those are words spoken by Hillary Clinton’s senior policy advisor about the draft of the Democratic Party platform and they should frighten every American that supports free enterprise and a restrained federal government. The platform draft approved by the Democratic drafting committee consisting of both Clinton and Sanders allies includes proposals that will make it more difficult for individuals to break free from government constraints and achieve the American Dream.

There are many dangerous proposals in the Democratic Party’s platform that should raise concern: 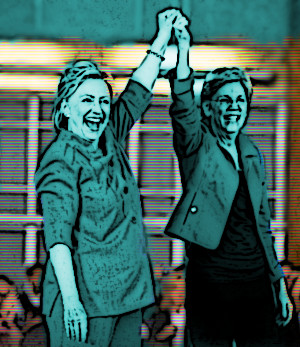 In addition, Sanders allies proposed some costly ideas that were just a vote away from becoming part of the platform and will no doubt be under consideration in a Democratic administration. Those include:

These policy prescriptions are threatening, not only to conservatives but for the country as a whole. They represent a sharp left turn in favor of policies that radically expands the size of government and continues to restrict freedoms of individuals across the country.

Could there be more excitement than watching these two fight over the BeanO?

The GOP might be the stupid party, but the Dems are the insane party.

I thought Israel left Gaza years ago. no?

"Climate Change and Clean Energy: Moving beyond the “all of the above” energy approach in the 2012 platform, the 2016 platform draft re-frames the urgency of climate change as a central challenge of our time, already impacting American communities and calling for generating 50 percent clean electricity within the next ten years. The Committee unanimously adopted a joint proposal from Sanders and Clinton representatives to commit to making America run entirely on clean energy by mid-century, and supporting the ambitious goals put forward by President Obama and the Paris climate agreement.  Another joint proposal calling on the Department of Justice to investigate alleged corporate fraud on the part of fossil fuel companies who have reportedly misled shareholders and the public on the scientific reality of climate change was also adopted by unanimous consent."