The shooter in Orlando is tied to ISIS and worked for a security firm in Jupiter, passing all tests to obtain guns. He was known to the FBI since 2013.

Another man was arrested on a tip today as he was traveling to the Gay Pride parade in Los Angeles carrying possible explosives and rifles with ammo. The car had Indiana plates and he had the components of a pipe bomb.

Remarkably law enforcement in LA are telling the people they are safe and they have no reason to believe there is an ongoing terror threat.

The shooting in Orlando, Florida is tied to ISIS and that has been confirmed. The terrorist was shouting "Allahu Akbar" in the street and in the nightclub. 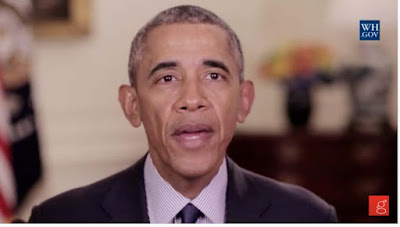 The president said in a speech that the slaughter of 50 people and the wounding of 53 was an attack but he doesn’t know what the motives are. He never used the words Islamic, radical Islamic, or any other realistic term.

His mentioning of his concern for LGBTs falls a little flat because he certainly isn’t protecting them. Shall we wait until they are being thrown off buildings in this country?

Apparently the terrorist’s ties to ISIS, including a 9/11 call to them at the time of the attack, was not a dead giveaway. Omar Mateen, the terrorist, pledged allegiance to ISIS in the moments before the attack.

The president called it murder and a massacre, saying they don’t know the motivation and only know that the shooter was filled with hate. He mentioned “terror” but that was as close as he got to describing it accurately.

Obama politicized the terror attack, saying this is about gun violence and it’s to easy to get a gun in this country.

The shooter worked in security and passed all tests to have a weapon, however.

Obama is trying to define down what terrorism is and reduce it to terrorism only if ISIS comes over as an army waving a black ISIS flag on their way over. That’s a dangerous viewpoint and it’s insane.

The Islamic State has just taken credit for the terror attack in Orlando and this was broadcast from their own media. They usually don’t announce responsibility so quickly over their official media but maybe they are tired of the president pretending it’s not what it is.

The Administration is in full spin mode, the ACLU is blaming Christians, we're promised more of the same by the religion of peace, and the President sticks to ValJars game plan. When does a determined effort to ignore reality become mental illness?

When does a failure to protect your country and your people from enemies become treason?

The Treason train left the station with fast&furious.

all ISIS do is out of sense...

When do we realize that the phony president, with the phony "birth certificate," is in fact a muslim?

Does he have to wave around his very own AK-47 and wave the black flag to convince us?

HahahahahaLOL, I want to see Comey actually mouth the words "radicalized online".
It is a testament to what good people will do to retire with enough money to pay for food; and it is a tribute to Obama for using this event to make sure the Errornet is thoroughly locked down.