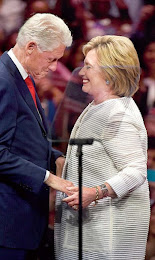 Obama on Pace to Issue a Million Green Cards to Muslim "Migrants": Caroline May
No, CAIR Doesn't Like Homosexuals: Gregg Roman
Insane: Just 29% Of Democrats Say Orlando Was An Islamic Terror Attack: IBD

Top secret clearance for sale, call and ask for Hillary: Examiner
Wikileaks Looks to Bring Down Clinton: Alicia Hesse
Four Lies The Media Has Been Telling You Since The Orlando Attack: Caleb Howe

How Uncle Sam Became Uncle Tyrant -- If Washington Wants To 'Get' You, It Now Can: Steve Forbes

Watch This Amazing Rant Against Politicians Calling for Gun Control: Jenn Jacques
Why Not Admit the Obvious?: Jeffrey T. Brown
Scott Baio Wonders If Obama Is a Muslim Who Wants to ‘Eliminate’ the Country: Josh Feldman

ICYMI: NASA is studying how fire acts in space: Kerry Davis
Google Fiber now forces subscribers into binding arbitration; days left to opt out: Cory Doctorow
The newly-discovered X boson could rewrite the Standard Model. But only if it actually exists: Wired

QOTD: "I got the percentage from one of my sources. We’re talking about, right now, in the refugee stream, between 15-17% of individuals coming through the refugee stream are ISIS. Add to that the layer of the fact that we can’t really screen these folks." --Lt. Col. Tony Shaffer

Only 29% of Democrats think that Orlando was a terrorist attack. I guess that puts a hard cap on how many are going to vote for Trump.

.
And, the desire to investigate guns as a "disease" is back.

Trump should offer up a compromise where Islam is researched as a disease instead of guns. It seems to fit. The condition is dangerous and often fatal, communicable, and has infectious centers (or tumours) known as mosques.

My SO and I drove to Portland this weekend and discussed many things, one of which was an employee who was deciding on "gender neutral names" for their unborn child. It looks like this is the new wave, and it is appropriate for the Snoflake Generation.
We struggled to arrive at a descriptor for the decision that has empowered freaks to visit girl's rest rooms and settled on the word "Indecorous" as embracing the elements that will find me confronting any and all of an opposite sex who wish to change clothes next to my BFF. The word "sex" is an apt one for chromosomes, the word "gender" is appropriate only for language.
And that Barry refuses to call out his fellow Muslim travelers as terrorists makes me wonder about a new TV Quiz Show featuring Barry, Mooch, and Mrs. Robinson choosing alternate names for every key aggressor in Military history, reel the tape, drop the monikers - - - but alas, I see there already is such a game:
http://www.monikersgame.com/