NEW "COMPROMISE" BILL: Your Constitutional Rights Can Be Revoked at the Discretion of the Government

If the news reports are correct, the latest “gun control” proposal being put forward by Sen. Susan Collins, R-Maine, is a “measure that would block people on the Transportation Security Administration’s no–fly list from buying firearms,” according to ABC News.

There is one major problem with that proposal: It is potentially unconstitutional since it would take away a constitutional right—your Second Amendment right to bear arms—at the discretion of a government official in a secret, nontransparent process that has no adequate due process protections.

Let’s be clear—we don’t want terrorists buying guns in this country. Nor do we think that they have a Second Amendment right to do so. But this blunt instrument is not the right solution.

The Terrorism Screening Database is the official name for the “Terrorist Watchlist” maintained by the FBI’s Terrorist Screening Center. This database is the U.S.’s central repository of foreign and domestic known and suspected terrorists. How individuals get onto this list is classified, as is the process for individuals getting from that list onto the no-fly list maintained by TSA.

We don’t know what evidence is required by the government or what the standards are for the government having a “reasonable suspicion” that would place any American citizen on the no-fly list. And more than one court has held that the procedures for an American who may have mistakenly gotten onto the list to get off are inadequate. The ACLU complains that the government often fails to “provide meaningful notice“ and to explain why an individual is listed 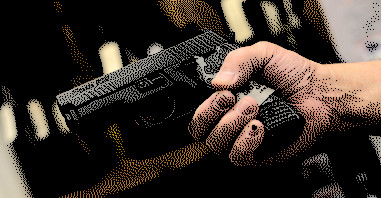 We certainly know that the government makes mistakes. Rahinah Ibraham was a scholar and doctoral candidate at Stanford University with a valid student visa who ended up on the list through a clerical error by an FBI agent. As an alien, she would not be entitled to purchase a gun, but the mistake that landed her on the list and the ten years of litigation she went through to get off of the list shows the problem with the lack of transparency and due process involved in the maintenance of the no-fly list.

Another well-known case is that of Stephen Hayes, a senior writer at The Weekly Standard and a regular on Fox New (and a former Heritage intern). He also was put on the no-fly list with no notice to him; the first he knew about it is when he showed up at the airport for a trip to Minneapolis.

Or Abe Mashal, a 34-year-old Marine veteran who also got put on the no-fly list and was part of a lawsuit against the government by the ACLU, in which a federal judge said that the current redress system for getting off of the secret list was “wholly ineffective” and fell far short of the due process required by the Constitution.

No one questions that we need a no-fly list to prevent suspected terrorists from being able to take over airplanes and repeat the type of horrendous attack that occurred on Sept. 11, 2001.

But there are literally tens of thousands of individuals on that list today and the “reasonable suspicion” standard for getting on that list is not a very stringent legal test; keep in mind that apparently in many of these cases there is not enough evidence to actually arrest the individual and prosecute him for supposed terrorist activities. And while one might assume that it is suspicion of terrorist activity that will get you on the list, some reports indicate that other factors such as just traveling to certain countries or having a similar name to someone on the list can get you on the no-fly list.

If a member of Congress proposed taking away your right to criticize the federal government under the First Amendment or your right to vote in the upcoming election because you are on the government’s secret no-fly list, people would be shocked at the very idea of taking away such fundamental rights based on mere suspicion; without requiring the government to prove its case against you in a court of law; and without any of the due process rights we are guaranteed under the Bill of Rights as citizens of the United States.

But so many liberals would like to write the inconvenient Second Amendment out of the Bill of Rights, that they see no problem with treating it as simply a privilege that the government can take away at will.

If Congress truly wants to bolster our counter-terrorism efforts, they should concentrate on strengthening the investigative tools that can be used by law enforcement, as well as increasing the prosecutorial resources and war-fighting ability needed to stop the murderous acts of jihad being perpetrated against Americans.

That means focusing on the terrorists themselves, and not on measures that take away the constitutional rights of Americans at the discretion of government bureaucrats.

We were betrayed by the Republicans we sent to Washington to counteract these abuses. I'd bet they even made sure the shooter got a muslim funeral.

The TSA! Think of it! Think of that paragon of competence and comprehension being in charge of a list, assembled by tools of the State and with unblinking obedience. It may as well have Valerie Jarrett's hand guiding the entire enterprise. That the TSA would be the arbiter of our civil rights is almost too perfect an end to our republic. The TSA! Who was the first to trot out the narrative that a person on the no-fly list should be denied their civil rights? THAT would be a tasty morsel of back room persuasion. First get everyone nodding in agreement that the no-fly list is a legitimate judge, jury, trial and sentence by aiming a gun at the public's imagination. Oh, it's too perfect!