Epidemiologists at the Vermont Department of Health are concealing the number of refugees with contagious active tuberculosis nearly a month after Watchdog reported that more than one-third of Vermont’s resettled refugees test positive for TB.

Earlier this month, Watchdog revealed that 35 percent of Vermont’s incoming refugees in the past four years tested positive for tuberculosis. How many of those cases are contagious and symptomatic, however, remains a secret, as state epidemiologists and top officials at the Health Department have spent weeks blocking efforts to obtain the data.

According to documents obtained through a public records request, the evasions began May 27, when Watchdog contacted the Health Department to learn how many refugees tested positive for TB in recent years. The inquiry sparked private meetings among state epidemiologists, public health nurses and office staff, who proceeded to conceal the number of contagious active TB disease cases brought to Vermont through the Vermont Refugee Resettlement Program.

State epidemiologist Patsy Kelso sent Watchdog’s May 27 request for data to Laura Ann Nicolai, deputy state epidemiologist and head of the tuberculosis control program. Nicolai met with department staff and legal counsel that day and the following week to concoct a plan to hide the number of refugees with active TB disease.

“This doesn’t say that he wants to know how many cases were identified, so I wouldn’t offer it. If he asks it would be important to explain that latent infection is not reportable,” Nicolai wrote to the team on May 27.

When the team conferred again on May 31, Nicolai discussed what to do if Watchdog wanted “additional information on TB disease specifically.” 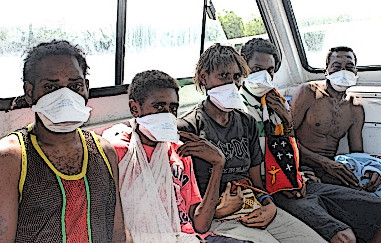 “If the reporter wants additional information on TB disease specifically then either Sally or I would be happy to talk with him. We could discuss the difference between latent and active infection, etc. or any of the talking points I provided on Friday,” Nicolai wrote.

She added: “If at any point along the way he changes what he wants and decides he’d like additional data, such as the number of active cases among refugees, then we can cross that bridge when we come to it.”

The draft response, completed an hour and a half later, included four years of refugee TB blood test results and bulleted information explaining the difference between latent and active TB. Excluded from the response was the number of refugees with active TB disease.

When Truman delivered the Health Department’s June 1 response to Watchdog without the number of active TB disease cases, Watchdog asked for “actual numbers of refugee active TB cases per year, starting at FY2011 and ending in FY2016.”

Truman, according to plan, replied: “To address the scope of the additional information you want, please submit this as a formal public records request.”

With the limited information provided, Watchdog reported that 318 refugees out of about 900 admitted to Vermont since 2013 — or 35.4 percent — tested positive for tuberculosis. Regarding active TB cases, the article included the only statistic offered by the Health Department — a comfortingly low incidence statistic of 5.4 cases per year over five years. That statistic includes Vermonters only, not refugees with active TB disease.

Truman replied: “I suggest any further info be in the context of responses to any PRR [public records request] he may choose to make. To my knowledge, none has been made at this time.”

Watchdog filed a public records request on June 9, asking again for the statistical number of active TB disease cases among resettled refugees. The Health Department’s response, delivered June 23 “on behalf of the Commissioner of the Vermont Department of Health,” did not provide the data.

The response did reveal the team’s evasion efforts, however, captured in this series of emails.

The development comes as Rutland Mayor Christopher Louras and the city’s Board of Aldermen are weighing whether or not to let residents vote on accepting 100 Syrian refugees in October. Louras says letting the people of Rutland vote on the issue is “offensive.”

Watchdog has additional requests pending at the Department of Health and plans to report the annual number of active TB disease cases among refugees resettled in Vermont over the past five years.

This is a poignant commentary on the Obama refugee program. It is an open secret that refugees and immigrants test positive for TB at rates 13 times those of Americans, according to the CDC. Also 88% of the active multi-drug resistant TB cases are among immigrants.