The False Comparison of Trump to Hillary

A lot of Republicans still upset over Donald Trump winning the nomination resort to a false equivalence between Trump and Clinton in order to justify sitting the election out or even voting for Hillary.

Take a recent example by the National Review’s Ramesh Ponnuru. First he lists Hillary’s manifold sins that Trump is innocent of: lying to the parents of the Benghazi victims, promising to nominate hard-left jurists to the Supreme Court, and supporting Obamas’ high-tax economics and unconstitutional amnesty of illegal aliens.

Then Ponnuru offers a catalogue of Trump’s sins Hillary hasn’t committed: mocking a reporter’s disability, indulging a preposterous conspiracy theory about Ted Cruz’s father and Lee Harvey Oswald, threatening a trade war with China, or threatening war crimes against the families of terrorists. Trump’s list presumably balances Hillary’s flaws, in order to make the point that both Trump and Hillary are equally distasteful, thus making the election a Hobson’s choice for principled conservatives.

But this comparison is false and misleading, for Trump and Clinton have had very different careers with different obligations and responsibilities. 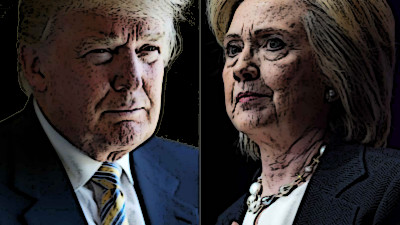 Most obviously, Donald Trump is a private citizen who has never held public office. He is a businessman in a world where decorum and class often aren’t as important as sharp elbows and tough negotiating skills, where making a profit is more important than consistency or sparing people’s feelings. His goal is to make money, and his flamboyant life-style is our culture’s sign of his skills and success at doing so. Moreover, his flaws of personality and character, like his rude bluster and outrageous claims, are not, alas, that exceptional or different from those of millions of other private citizens, which may explain his populist appeal. And in his line of work, especially as a reality television star, such braggadocio and insensitivity may be assets. Intellectuals of more delicate sensibilities and refined manners may not like such déclassé qualities or grubby dealings, but most of them don’t live in a hard, risky world of tough negotiations and profit and loss.

Hillary Clinton is in a very different line of work from Trump’s. Her whole life has been spent as what we laughably call a public servant. In other words, she is supposed to be working not for profit or her own status and enrichment, but for the public weal. For progressives, that means striving for “social justice,” income equality, the abolition of prejudice and bigotry, the emancipation of women, the improvement of the middle class, and the salvation of the planet from the merchants of death by carbon. This is what she tells us over and over, and this is her case for why she should be president.

But while Trump’s character flaws have been assets in his profession, Hillary’s arrogant sense of entitlement, relentless money-grubbing, chronic mendacity, and obvious dislike of people other than her minions all undercut her claims to be a public servant, and help explain why she has serially failed at that role.

Of course, some presidents have shared the same flaws as Hillary, but they at least showed some restraint in exploiting their position for private gain, and at least could pretend to be a warm “people person,” as the ghastly phrase goes. Even Richard Nixon appeared on Laugh In. But Hillary has been inept at camouflaging her unseemly ambitions and even pretending to be a caring tribune of the people––in contrast, say, to Elizabeth Warren, who is just as much a hypocritical one-percenter as Hillary, but manages to come across as sincerely passionate. With Trump, however, you know exactly what you’re getting.

Finally, if a businessman like Trump fails, he reaps most of the damage. But if a “public servant” like Hillary fails, the security and interests of every single one of us are damaged, even as she advances her own political and fiscal interests as much as Trump does. Trump’s alleged shenanigans with Trump University are nothing compared to Hillary’s exploitation of her position as Secretary of State to steer money to her foundation, which is to say to herself, her husband, her daughter, her friends and political cronies, no matter the damage to America’s interests. Trump’s inconsistencies and alleged exaggerations about his net worth or charitable contributions are a dog-bites-man story compared to Hillary’s lies about Benghazi and her private email server. Nothing Trump has publicly said or done is as self-servingly despicable as Hillary’s implications that the grieving families of the four dead Americans in Benghazi are not telling the truth about her personal promise to them to “get” the obscure producer of the on-line video supposedly responsible for the attacks, when she knew that claim was untrue.

Perhaps Trump’s flaws would make him a bad president. But other presidents who had flaws equally distasteful––such as Lyndon Johnson, Richard Nixon, or Bill Clinton––managed to do some good things as president regardless. With Trump there’s at least a chance he could turn out to be a better president than his bluster and insults suggest. Hillary, on the other hand, has a long public record of using her position for personal gain, and putting her ambition ahead of her responsibilities to the country she supposedly serves. Her role as First Lady was marked by bungling health care reform, indulging silly fantasies of a “vast right-wing conspiracy,” and allowing herself––an “I am woman hear me roar” feminist––to be publicly humiliated by her satyr husband while attacking his victims. Her tenure in the Senate lacked any substantive legislative achievements, and her stint as Secretary of State furthered Obama’s destruction of America’s global influence, power, and security from Syria to the South China Sea. It may be possible that she could experience a road-to-the-White House conversion and become a good president, but given everything we know from her 25 years of public “service,” the probability is close to zero.

With Trump, in contrast, we know that at least he won’t be as destructive to our political order as Obama has been. With Hillary the odds are much higher that she will continue Obama’s “fundamental transformation” of our country into an E.U.-like technocratic regime of smug elites whose aim is to erode individual freedom and compromise our country’s sovereignty. Worse yet, if she becomes president, she will most likely nominate two or three Supreme Court justices, creating a court that will gut the and First and Second Amendments and legitimize further the dismantling of the Constitution’s divided powers and limited executive. And don’t put your faith in the Republican Senate that confirmed Loretta Lynch to shoot down every one of Hillary’s picks, even if that means eight years of an eight-member court.

The November election is not a choice between two equally bad candidates. It’s the moment when we reject the candidate who we know, based on her long public record of corruption, lying, and grasping for power and wealth, will take us further down the road to political perdition.

Isn't it a shame that many people graduate from fraudulent institutions of higher learning with huge bills hanging over their head, often as much as $200,000, and all they end up with is a degree in Women's Studies or equivalent? Which isn't worth a dime in terms of employment (or by any other measure.)

It's time these fraudulent Universities got prosecuted for their crimes, let's put Harvard, Yale and all those worthless degrees under the microscope, and start legal proceedings to return that tuition money to the people who have been cheated!

Trump U was not an accredited institution. I'm also quite sure that Harvard or Yale didn't pressure potential students into taking out and maxing credit cards or dipping into retirement