Atlanta, Georgia has not been governed by a Republican mayor since 1879. Most significant is the fact that the city has been led exclusively by Democrats since the 1960s and early '70s, the period when the Democratic Party emphatically broke away from centrist liberals and fell predominantly under the sway of its far left wing, a course which it still follows to this day.

One of Atlanta's more important political figures during this Democratic era was its first African American mayor, Maynard Jackson, who held office for three (non-consecutive) four-year terms: 1974-78, 1978–82, and 1990–94. In May 1974, the newly elected Jackson stoked racial tensions in Atlanta when he undermined the authority of the incumbent (white) police chief, John Inman, by making him subservient to the newly appointed “Public Safety Commissioner,” the black activist Reginald Eaves. Eaves was a longtime friend of Jackson's and had no law-enforcement experience whatsoever. Corrupt to his core and possessing an unparalleled sense of shameless entitlement, Eaves openly and defiantly used public money to purchase extra options on his fully loaded city vehicle, stating: “If I can’t ride in a little bit of comfort, to hell with it.” He sparked further controversy when he appointed an ex-convict as his personal secretary and instituted a quota system that gave preference to African Americans for hirings and promotions within the police department. Eventually, in 1978, Mayor Jackson was forced to fire Eaves for the role the latter had played in a scandal where he had helped police officers cheat on promotions exams.

By the late '70s, the Atlanta business community had become increasingly concerned about the city's rapidly rising crime rate. Between 1978 and 1979 alone, Atlanta experienced a 69% increase in homicides. It now had the highest murder rate—and the highest overall crime rate—of any city in the United States. The police force, meanwhile, dwindled in size by 25% between 1975 and 1979, causing the officers to be generally overextended and demoralized. 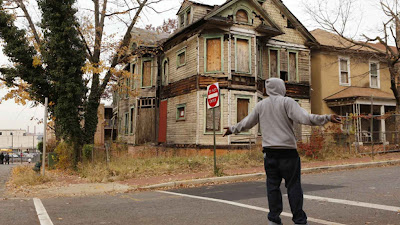 In January 1994, as Jackson's third and final term as mayor was winding down, one of the most politically explosive trials in Atlanta history centered on an affirmative-action program by which Jackson's administration had tried to increase the presence of black-owned shops and businesses at Atlanta's Hartsfield International Airport. A federal court jury convicted a former airport commissioner and councilman on 83 counts of mail fraud, 4 counts of tax evasion, and 43 counts of accepting bribes from an airport concessionaire in return for favorable treatment, like reduced rent at the airport.

In 2002, an investigation by The Atlanta Journal Constitution found that friends of Jackson and another former Atlanta mayor, Bill Campbell (1994-2002), for years had received “the vast majority” of contracts awarded by the Atlanta airport which were supposed to go to members of the black community generally. In at least 80 of the 100 contracts reviewed during the probe, one or more of the business partners involved had cultivated a relationship with either Jackson, Campbell, or both. Further, most of those partners had contributed money to the Jackson and/or Campbell mayoral campaigns.

As for Mayor Campbell, by no means was this his only brush with political scandal. A seven-year federal corruption probe resulted, in 2006, in the convictions of no fewer than ten city officials tied to his administration. Campbell, for his part, was convicted of three counts of federal tax evasion.

Where political corruption runs rampant, it is often closely accompanied by gross financial mismanagement—Atlanta being a case in point. For many years the city's political leaders—in exchange for the slavish political support of unionized public-sector workers—promised an unending array of unsustainably exorbitant healthcare and pension benefits to those employees. Consequently, by 2011 Atlanta's city government owed no less than $1.5 billion in unfunded liabilities on the pensions of its public-sector workers. That ominous figure was expected to triple within ten years if left unchecked. Recognizing the gravity of the situation, the Atlanta City Council in 2011 approved a long-overdue restructuring of the city's pension system.

The mismanagement of Atlanta's finances is reflected also in the economic condition of city residents as a whole. Today, some 29.5% of those residents live in poverty. And according to a recent study by the Brookings Institution, Atlanta has a greater disparity between rich and poor than any other urban area in America.

As in so many Democrat-run U.S. cities, Atlanta's public-school system has grown, over time, into a bureaucratic monstrosity of waste and ineptitude—exhibiting efficiency only in its ability to separate taxpayers from their hard-earned money. Every year the Atlanta Public Schools (APS) system gobbles up some $15,000 in taxpayer funds—about 50% more than the national average—for the education-related expenses of each K-12 pupil in its jurisdiction. Notwithstanding these massive investments, APS students perform abysmally on achievement tests designed to measure their academic competence. In 2013, for example, proficiency rates for APS eighth-graders were a meager 22% in reading and 17% in math. Moreover, the high-school graduation rates of APS students in recent years have ranged between 51% and 59%, far below the national average of 78%.

No profile of Atlanta would be complete without a mention of the crime rates that have long plagued the city. To name just a few, Atlanta's rates of murder, robbery, and auto theft exceed the corresponding national averages by 355%, 405%, and 320%, respectively. In 2013, Atlanta ranked, statistically, as the twelfth most dangerous city in the United States. From a global perspective, the incidence of gun murders in Atlanta is about the same as in South Africa, a nation infamous for its exceedingly high homicide rate.

Atlanta is merely one of many Democrat-run cities whose economies, school systems, and quality-of-life indicators have been run into the ground by their political leadership. And yet, for decade upon decade, Atlanta voters have never questioned their blind devotion to the Democratic Party. If nothing else, they are living proof that, to many Americans, party loyalty is quite literally the emotional equivalent of religious faith. False gods are almost never recognized for being the frauds and imposters that they are.
Read more at FrontpageMag.com.