Gee, I don't sense anything hypocritical about this factoid:

For years, Kilauea, Kauai resident Gy Hall has enjoyed the view of the ocean and the breeze along Koolau Road. Then, a few weeks ago, a crew started to build a wall which happens to belong to Facebook founder Mark Zuckerberg.

“The feeling of it is really oppressive. It’s immense,” Hall said. “It’s really sad that somebody would come in, and buy a huge piece of land and the first thing they do is cut off this view that’s been available and appreciative by the community here for years.” 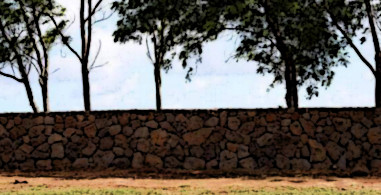 Hall said the wall extends along Koolau Road, near mile marker 20, and is about six-feet tall. He said its projected length and completion are unclear.

Multiple attempts by TGI to contact Shawn Smith, former Falk Partners manager, who Hall says sold some of the $200 million, 700-plus-acre property to the billionaire, were unsuccessful Friday...

...Shosana Chantara, a Kilauea resident, voiced her concerns about the breeze that’s being obstructed.

“It’s hot behind that wall. Because it’s up on a berm, there’s not a breath of air on this side from the ocean,” Chantara said. “You take a solid wall that’s 10 or more feet above the road level; the breeze can’t go through.”

...Another Kilauea resident, Donna Mcmillen, calls the wall a “monstrosity.”

The island of Kauai is a masterpiece of natural beauty.

That Zuckerberg would both build a security wall and despoil one of the most spectacular islands in the world would shame a normal person, but not -- of course -- any Democrat.

Hypocrisy in its truest form

Anyone that gets past his wall should get a free room, free meals, a cell phone and a monthly stipend from Zuckerberg.

Open borders applies only to lesser people...but considering the political leanings of Hawaii, you'd think his neighbor's would understand.

The super rich - and what type of oath did they have to take to be given that tremendous wealth? - are now coming out and showing what fascists/commies they really are. Wall Street powerhouses, representing even more powerful financial forces, built up Nazi Germany and Bolshevik Russia. Yes, the super rich built up communism. Why? Because their goal is to enslave all mankind, but not them, they will be the overlords. Read WALL STREET AND THE BOLSHEVIK REVOLUTION and WALL STREET AND THE RISE OF HITLER, both by Professor Anthony Sutton. Read an even greater revelation, of who is behind Wall Street. Ex Roman Catholic priest Leo Lehmann wrote BEHIND THE DICTATORS, and he exposed the real puppetmasters.
Zuckerberg, Gates and other extremely wealthy, are in power, placed there by a more potent evil. Do you think they are so brilliant, above all men, and that is why they are so rich? No, the rich are endowed with that wealth because of their BLOODLINE and their OATHS. But oaths to whom? To the Jesuit controlled papacy, that's to whom. Zuckerberg is just a front for truly evil men. Read VATICAN ASSASSINS by Eric Jon Phelps, and the comics of Alberto Rivera by chick.com and on the internet (hopefully, they are still there - some sites have them removed).

Listen to Leuren Moret on you tube. In one video she says that Fidel Castro is actually a scion of the ancient and powerful and VASTLY WEALTHY Farnesi family. The Italian nobility rules over this system. And who rules over these super wealthy Roman banking families? The Jesuit ruled papacy is the power behind them all. And their goal is domination and genocide of everyone but them and their elite and their slaves. Zuckerberg is just a front. Who really built up Zuckerberg? Who built up Bill Gates. I have read several times that when certain superwealthy died, it was discovered they actually had very little money! So where did their apparent power come from? From the Italian banking families. And where did their power come from? From the Jesuit ruled papacy. Go to google and type in "Alberto Rivera the Jesuit priest who told the truth". At the bottom of that page will be a chart of world power. The top is the Jesuit General of Rome. ZUCKERBERG IS, LIKE GATES, A FRONT for the real powers. It is they, not their fronts like presidents, big businessmen, crowned "heads", who are the slavemasters of the world. These slavemasters control the papacy and they are the Jesuits of Rome. Ex priest Jeremiah Crowley wrote two books: ROME A MENACE TO THE NATION and THE POPE, CHIEF OF WHITE SLAVERS AND HIGH PRIEST OF INTRIGUE. The Jesuit society is behind the papacy. They are the real slavers over all men, through their fiat based currency system, which enables them to STEAL THE WEALTH AND CREDIT OF PEOPLE OF ALL NATIONS. They used their tools on Wall Street to build up the Nazis - they love the Nazis and were behind the concentration camps - and the Bolsheviks and controlled Lubyanka and the gulags. If you are one of the elite - by bloodline, that's what makes them elite. You can look at them and see them as ordinary and "like us", but they have the bloodline. One example out of countless, and mentioned by Leuren Meuret, is Leon Panetta, from an ancient Roman bloodline. You can't go by appearances.