On Friday morning, Nehlen’s campaign went live with a new billboard in Ryan’s hometown of Janesville, Wisconsin that is reminiscent of the distinctive UKIP-style campaign. 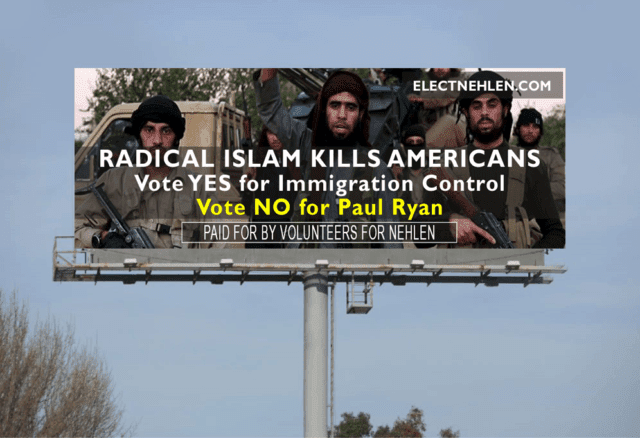 The billboard then directs viewers to Nehlen’s campaign website, ElectNehlen.com.

UKIP’s national billboard campaign is distinctive for its clear, straight-forward manner of describing the effects of large-scale migration and its impact on workers and Western culture. 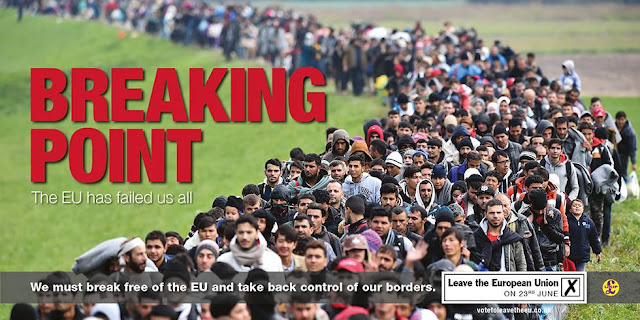 “This is the first of many billboards our campaign will be launching to inform the voters about what’s at stake on August 9th,” Nehlen told Breitbart.

As Nehlen’s billboard suggests, Paul Ryan has a two-decade long history of pushing for open border immigration policies – including his 2015 effort to fund President Obama’s expansion to the U.S. refugee resettlement operation.

In speeches, Ryan has made the case for policies that would effectively dissolve U.S. borders — declaring that the U.S. “is more than [its] borders.” Ryan has even articulated his support for implementing an immigration system similar to the open borders policy of the European Union — calling for “an economic-based immigration system where… labor and supply can meet each other so we can help fuel our economy and create jobs.”

The phrase “labor supply and demand can meet each other,” is a centerpiece of open borders thought. Under this global, one-world theory, any willing employer should be able to hire any willing worker regardless of what country he or she lives in. This view, that America is an “idea” and not a “nation,” sees borders as an obstacle to commerce.

He has repeatedly ruled out the possibility of making any cuts to Muslim migration— insisting that “that’s not who we are,” and that such a proposal is “not reflective of our principles.”

However, Ryan has not explained how importing hundreds of thousands of migrants from nations that hold sentiments that are anti-women, anti-gay, anti-religious tolerance, and anti-America benefits the United States or helps to protect our Western values.

Indeed, as a result of large-scale Muslim migration, the U.S. has imported several practices and values that are antithetical to Western principles.

For instance, Muslim migration has put half a million U.S. girls and women at risk of suffering the barbaric and misogynistic practice of Female Genital Mutilation, according to Equality Now.

A 2011 study by the Tahirih Justice Center titled, “Forced Marriage in Immigrant Communities in the United States” found that in the U.S. there are “as many as 3,000 known or suspected cases of [forced marriage],” identified by survey respondents in recent years.

The high rate of Islamic migration has also posed challenges to national security. As CBS has reported, “The Cedar-Riverside neighborhood of Minneapolis [which] is sometimes called ‘Little Mogadishu’” given that it is the “center of the nation’s largest concentration of Somalis,” has become a “fertile ground for Islamic terrorist groups recruiting new fighters.”

As the Minneapolis Star Tribune has reported, a Congressional report found that “Minnesota leads the nation in would-be ISIL terrorists from U.S.”

Moreover, evidence has shown that the recent Orlando terrorist attack, in which the son of Afghan migrants targeted the LGBT community and slaughtered 49 people in a gay nightclub, was motivated by anti-Western ideology that was imported from foreign nations rather than “homegrown.”

As Andrew McCarthy has explained, “The inspiration for Muslims to brutalize and mass murder gay people does not come from ISIS. It is deeply rooted in Islamic law, affirmed by many of Islam’s most renowned scholars.”

McCarthy explains that “the mandate that homosexuals be killed” comes from Sharia – not ISIS. “This is why, wherever sharia is the law, homosexuals are persecuted and killed,” McCarthy writes. “[With the Orlando terror attack] we have gotten another glimpse of radicalization, which is not “homegrown” but rather fueled by a foreign, anti-American, anti-liberty ideology.”

According to Pew, nearly all Muslims in Afghanistan (99 percent) support sharia law as official law. Between 2001 and 2014, the U.S. permanently resettled more than 40,000 migrants from Afghanistan on green cards.

Additionally, between 2001 and 2014, the U.S. permanently resettled 674,920 migrants from nations where gays can be executed, according to data from the Department of Homeland Security (DHS).

This figure does not include the total number of migrants the U.S. has permanently resettled from Muslim nations during that time, which is nearly 1.7 million.

The current rate of U.S. immigration is record high. Every day the U.S. admits enough net immigrants to fill an overcrowded, metropolitan high school. Every month the U.S. imports a population of immigrants that is larger than the occupancy of Lambeau Field, where the Green Bay Packers play.

Since Wisconsin voters sent Paul Ryan to Washington, the U.S. has imported a population of immigrants that is nearly three times larger than the entire population of Wisconsin.

In seven years time – unless Congress takes action to curb U.S. visa distributions – the foreign-born share of the U.S. population will reach an all-time high. In the 1920s, the last time the foreign-born share of the population reached a record high, then-President Calvin Coolidge hit the pause button for roughly fifty years, producing an era of explosive wage growth and allowing immigrants already in the country to assimilate.

Paul Ryan, however, has made clear that he does not wish to curb immigration, but instead has pushed legislation that would substantially increase immigration.

As NumbersUSA president Roy Beck has explained, “Open borders is in his [Paul Ryan’s] ideological DNA … He’s an ideologue and has spent his whole life working for ideologues. Open borders seeps out of every pore of his being … Ryan is the heart and soul of crony capitalism.”

GO NEHLEN! Let's get that Lyan Ryan OUT. He is a Uniparty, globalist, amnesty-loving supporter. A RINO of the first order. Get all the leadership OUT. McConnell especially. Come on Kentucky - do a recall if possible. Don't wait until McConnell's term is up - GET HIM OUT NOW.

This is going to be an odd election year. I will vote for Nehlen. Not Ryan is a lefty panderer. Not sure how I can vote for Trump. I really believe Trump never intended to get this far. Now, it seems pretty obvious he's looking for a way to back out.

I believe that Trump is in the race to give Killary the presidency. He is intentionally blowing it so she wins. He made a "deal" with BJ Bubba and will likely be "compensated" handsomely for playing his con game in front of the unwashed, ignorant masses.

Ryan an Obama democrat masquerading as a rino ...time to dump Ryan and elect Paul Nehlen in Wisconsin 1st Aug 9th.. Ryan all in for illegals amnesty like loser David Cameron
Trump and Nehlen will help America get Right Again