Only a captured government drone could put out a report showing only 38,000 new jobs created, with the working age population rising by 205,000, and have the balls to report the unemployment rate plunged from 5.0% to 4.7%, the lowest since August 2007. If you ever needed proof these worthless bureaucrats are nothing more than propaganda peddlers for the establishment, this report is it. The two previous months were revised significantly downward in the fine print of the press release.

It is absolutely mind boggling that these government pond scum hacks can get away with reporting that 484,000 people who WERE unemployed last month are no longer unemployed this month. Life is so f***ing good in this country, they all just decided to kick back and leave the labor force. Maybe they all won the Powerball lottery. How many people do you know who can afford to just leave the workforce and live off their vast savings?

In addition, 180,000 more Americans left the workforce, bringing the total to a record 94.7 million Americans not in the labor force. The corporate MSM will roll out the usual “experts” to blather about the retirement of Baby Boomers as the false narrative to deflect blame from Obama and his minions. The absolute absurdity of the data heaped upon the ignorant masses is clearly evident in the data over the last three months. Here is government idiocracy at its finest:

Number of Americans who have supposedly voluntarily left the workforce – 1,226,000

Talk about perpetrating the BIG LIE. Goebbels and Bernays are smiling up from the fires of hell as their acolytes of propaganda have kicked it into hyper-drive. We only need the other 7.4 million “officially” unemployed Americans to leave the work force and we’ll have 0% unemployment. At the current pace we should be there by election time. I wonder if Cramer, Liesman, or any of the other CNBC mouthpieces for the establishment will point out that not one single full-time job has been added in 2016. There were 6,000 less full-time jobs in May than in January, while there are 572,000 more low paying, no benefits, part-time Obama service jobs. Sounds like a recovery to me.

It gets even better. The birth death excel spreadsheet “adjustment” added 224,000 phantom jobs into the May calculation. The lies – they burn. We know for a fact more businesses are closing than opening since the 2008 financial crisis. This model assumes more openings than closings. IT’S ADJUSTMENT IS DEAD WRONG. In reality, jobs should be subtracted from the total. It added 231,000 phantom jobs in April too. The jobs numbers are much worse than the bad numbers being reported.

When you see lies, misinformation and deceitfulness at this level, you have to ask yourself whether this entire debt supported house of cards is about to fall. The smell of desperation is in the air. The MSM stories about a booming economy are rolled out on a daily basis. Meanwhile, the average family is being crushed by Obamacare, rising rents, rising food costs, and no interest on any savings they might have left.

It also seems awfully suspicious that within seconds of the awful report, the faux journalists immediate reaction was NO FED RATE HIKE in June or July. These pundits of propaganda want the ignorant masses to think a .25% increase in interest rates actually matters to the economy or the average person. We’ve had ZIRP for almost seven years and the economy blows. Rates have been at emergency levels as the establishment has flogged the economic recovery story to death. There has been no recovery for the average person. The recovery has been for Wall Street and the sycophants who suck off their teat.

Obama has been on his self congratulatory tour exclaiming how f***ing awesome the economy has been under his reign of error. The Bush presidency was most certainly a fiscal disaster, but Obama’s tenure was even worse. The numbers don’t lie, but Obama does. 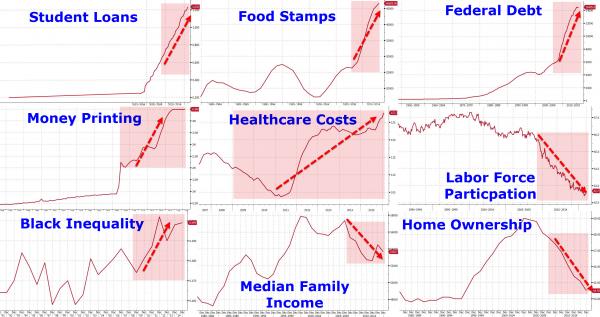 Look at that stupendous record of success. Obama should be as proud as punch. Since the unemployment rate is now back to 2007 levels, before the Federal Reserve/Wall Street/Washington DC created financial implosion, let’s take a look at the Obama success story:

It doesn’t matter how much propaganda the establishment peddles, average families who aren’t beholden to the establishment for their living, know how bad the things have gotten. They have been getting increasingly pissed off. The rising tide of support for Trump and Sanders is a reaction to the lies, misinformation, mismanagement, corruption, and lawlessness of the establishment. The people know they have been screwed. The complex web which makes up the establishment control makes it difficult for the average person to discern who exactly has screwed them, but they know a screw when they feel it.

As this summer progresses and the economy continues to sink, the anger will continue to build. The violence has already begun, as paid thugs are bused in to create havoc at every Trump rally. The establishment fears the unknown. They need to control the agenda. Trump scares them. The economy is clearly in recession for the average family. The stock, bond, and real estate markets are the most overvalued in history. A crash in any or all of these markets would unleash mayhem. The next five months could alter the future course of this country. Stay tuned.

A number of years ago an economist said that it was one thing for Zero's administration to misrepresent numbers, but another thing entirely to make them up and peddle the results as the truth. But, it is Barry's MO.

I'm not saying it's not true, but every person in America has a video camera with them at all times, yet I can't remember a single time I saw footage of these omnipresent buses.

Why can't we present the smoking gun to bust these social deviants?