OBAMA'S SPEECH AFTER THE ORLANDO TERROR ATTACK: Defeated and Indifferent

A must-read from Stuart Schneiderman, with a few of the key graphs below:

Obama offered up yet another profile in cowardice. He showed no passion, no emotion, no anger…. Nothing. He was acting as someone who had been trying to run out the clock and who had just been shown for the incompetent weakling that he is.

After all, he is the president; his FBI botched the investigation of Omar Mateen; his security agencies failed to pick up on someone who was threatening to kill people and whose father was a notable supporter of the Taliban. It’s Obama’s America; we live in the Age of Obama. His job was to keep us safe. If any American bears responsibility for yesterday’s events, that American is Barack Obama.

Obama expressed no anger. He seemed defeated. He suggested that we need to shower ISIS with love. His supporters, culture warriors to the end, immediately blamed it on guns. Anything but blaming it on ISIS or holding the president accountable.

The anti-gun activists were so overwhelmed with their own righteous fury that they failed to recognize the obvious point: the terrorist attack on the Bataclan in Paris on November 13 took place in a country where citizens are not allowed to own guns... 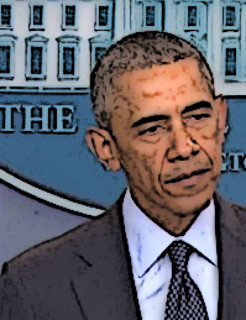 ...It takes a lot of effort to ignore Islamic attitudes toward homosexuality, but Obama was up to the task. For those who wish to be informed on the subject, Bruce Bawer writes in City Journal:

Islamic law, after all, is crystal clear on homosexuality, though the various schools of sharia prescribe a range of penalties: one calls for death by stoning; another demands that the transgressor be thrown from a high place; a third says to drop a building on him. In Iran, Saudi Arabia, Afghanistan, Sudan, Yemen, Mauritania, Pakistan, Qatar, the United Arab Emirates, as well as in parts of Nigeria, Somalia, Syria and Iraq, homosexuality is indeed punishable by death.

The terror attack yesterday made it imperative that we stand up to Islam and denounce Muslim attitudes toward homosexuality. Failing to do so is a sign of cowardice.

Lest you think that the American left was incapable of feeling anger, it did rise up in fury to denounce Donald Trump. For what? For getting it right. If Obama cannot show any willingness to face the enemy and to fight it, Trump said, he is unworthy of the presidency and ought to resign. If Hillary Clinton can do no better than to denounces the gun lobby she ought to withdraw from the presidential election.

Why isn't congress doing something about this despicable traitor? GET RID OF OBAMA NOW. Enough is enough. This country is being destroyed from the inside out. We have the most feckless, spineless people in positions of power I have ever seen. DO SOMETHING you imbeciles. This is getting beyond ridiculous - it CRIMINAL to keep this Muslim/Communist traitor as the leader of the free world (which has become less free by the second). What the hell is WRONG with you people. Put American first for a change and get rid of Obama NOW. Ugh . . . I am LIVID over this horrendous president that the idiots voted in. He is the absolute worst president ever. And this congress/senate (Rs&Ds - the Uniparty) are the most corrupt and arrogant. They all need to be SHOT or HUNG.

He and his retinue shall eventually be gone someday.
Their voters will remain amongst us .....

What you’ve just written is one of the most insanely idiotic things I have ever heard. At no point in your rambling were you even close to anything that could be considered a rational thought. Everyone On the Internet is now dumber for having read it. May God have mercy on your soul.

What a short memory. I guess you don't remember Bush sitting there with that stupid ass look on his face reading My Little Pony while planes hit the WTC. How bout his mission accomplished? 2 wars, almost sent us into the second depression, job loss at record highs. Do you think people don't remember how terrible Bush was? What you witnessed yesterday was what a president acts, sounds, and looks like! Orange is not the new black,

The US was never attacked again after 911.

What number terrorist attack is this one under Hussein Obama?