'Conveyer belt to terrorism' to host conference in Chicago


Delightful news out of Chicago. The Investigative Project on Terrorism reports that the pro-Jihadist group Hizb-Ut-Tahrir America (or HT) plans on raising its profile in the U.S. by hosting a conference in one of the metro area's suburbs. What is HT?

HT has been banned in Turkey and Germany for distributing literature that includes incitement to hatred and violence against Jews...

...In a paper for the Manhattan Institute, Gruen pointed to one leaflet distributed by the group titled: "And Kill Them Whenever You Find Them, and Turn Them Out From Where They Have Turned You Out." It stated that:

"Jews are a people of slander. They are treacherous people who violate oaths and covenants. They lie and change words from the right places. They take the rights of the people unjustly, and kill the Prophets and the innocent."

According to IPT, some of HT's literature also encourages "martyrdom operations" (e.g., suicide attacks) against Jews in locations unspecified. Presumably that includes here in the U.S., like at the mall or the corner pub. 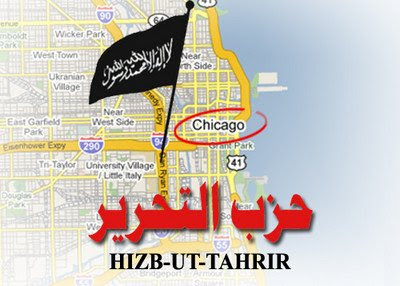 Further, HT preaches the establishment of Sharia (Islamic) law and the eradication of both the U.S. Constitution and our legal system.

The duty of the State is to implement Islam as a whole and to deem its implementation upon the non-Muslim as an invitation to Islam for them, because Shari’ah is ordained upon mankind; thus the State implements it upon every country that comes under its authority with the aim of conveying the Da’awah to it, because the secret behind the Islamic conquests is to carry the Da’awah to Islam.

As for the useful idiots who believe the cavalier exhortation that Jihad is a spiritual battle within oneself, HT helpfully clears that matter up quite succinctly.

Just in case the message wasn't clear, another of HT's readings spells it out in blood: 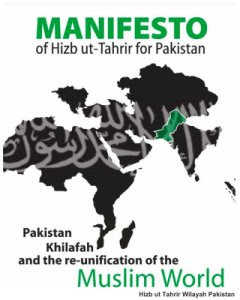 ...Jihad is the quality that should become second nature to the Islamic Ummah because it is the method of carrying the Da'awah to the world. The question that may be asked here is: will the struggle be with all these states at once, which is not a wise policy, or will the struggle be with some of them while the others will be covenanted, lest all the forces gather against us?

...The answer to this is that the struggle with the Kuffar takes two aspects, the first is the intellectual struggle, which is known as the political conflict, and the second is the bloody struggle, which is the actual war, which is Jihad. As for the intellectual struggle, i.e. the political conflict, this must be with all these states at once and no truce will be concluded with any state with regard to this conflict, because the nature of the contradiction between the ideology of Islam and the Capitalist ideology necessitates this confrontation...

...Hizb-ut-Tahrir is a political party with Islam as its ideology. Its objective is to resume the Islamic way of life by establishing an Islamic State that implements Islam and carries its Da’awah to the world...

Put simply, the mission of HT is to overthrow the United States government and replace it with Sharia (Islamic religious) law.

On July 19th, the group Responsible for Equality And Liberty (REAL) will be protesting the conference in Oak Lawn, IL. The conference is scheduled to run from 11AM to 5PM (CT) at the Hilton Hotel Grand Ballroom, 9333 South Cicero Ave., Oak Lawn, IL 60543.

If you can join or support REAL, please email realpublic@earthlink.net before July 18th.