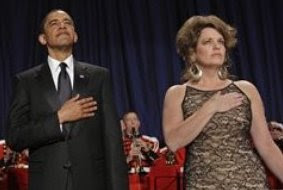 I'd call Jennifer Loven of the AP a useless sycophant and a slavish mistress of the Obama administration, but that would understate her remarkable lack of journalistic ethics. She is, to be sure, a publicist disguised as an objective reporter. After all, that's how one gets those cherished one-on-one interviews with President Obama. To put Jennifer Loven in perspective, consider the headlines of her bylined stories over recent months.

The Loven agenda -- and by extension, the mission of the AP -- is as clear as glass.

Jennifer Loven of the Associated Press is one of AP's regular reporters covering Mr. Bush and The White House... She also has an obvious conflict of interest, as her husband, Roger Ballentine, was a senior adviser to John Kerry on energy and environmental issues during the 2004 presidential campaign. Ballentine is currently president of Green Strategies, Inc., an environmental consulting and government relations (read: lobbying) firm. He also continues to be actively involved in the politics of energy and the environment, as this appearance at a renewable energy conference in December 2004 and the promotion for his October appearance on "E&E TV" show.

It has apparently never occurred to AP that her husband's point of view could affect the objectivity of Ms. Loven's reporting, though, as this post at Powerline supplied by me back in September 2004 shows, she went so far as to ridicule a 2002-2003 Bush Administration environmental initiative in one of her "objective" reports using language that parroted her husband's environmental advocacy statements.

Whether it's Iraq, the Joe Wilson charade (a report that led Powerline to call her a "Democrat Operative"), or the economy, Ms. Loven's reports on day-to-day happenings in the administration have been consistently negative and sometimes even hostile.