Even the most whacked-out liberals are admitting that the Town Hall protesters are neither "Nazis", "Insurance Lobbyists" or "Paid Corporate Suits". 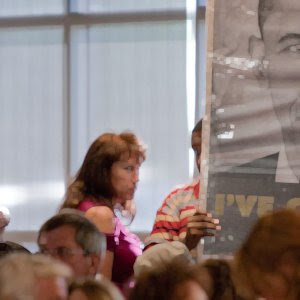 I just want to make a quick comment here where it will be seen. I know it's popular these last few days to talk about astroturfing and corporate sponsorship of protesters. However, I don't think much of that was going on tonight. These people are angry and afraid. They may be getting their talking points via the insurance industry but they were there because they wanted to fight what they are afraid of. They believe that this country is being turned into a socialist/fascist/communist/Nazi state (yes, many of them actually believe all of these things simultaneously) and that makes the angry, afraid and dangerous. Be wary of blaming this all on the insurance companies and their propaganda. Of course it plays a role. But these people were there tonight because they wanted to be. If you want to address this issue you need to get to the root of it: Rush Limbaugh, Glenn Beck and all the other hate-radio/television profiteers.

Of course, once the new FCC 'Chief Diversity Officer' -- the author of several anti-talk-radio strategy documents -- gets his way, the First Amendment will be flushed down the drain along with the rest of the Constitution.

As for turning into a socialist state, I'm no political scientist, but consider. If the government owns the means of production (banks, auto companies, insurance companies -- with designs on health insurance companies, oil refineries, energy companies, etc.), that probably qualifies as socialism. Oops! Did those facts -- disturb you?

"Will I lose my health insurance though my employer if this bill passes?"

No. Of course you will. Everyone knows it -- and Barney Frank even admitted it, bonehead.

"Will illegal aliens get health care under this bill?"

No. Of course they will. Sen. Robert Menendez (D-NJ) has already said as much (""the useless barriers of citizenship would not be in this bill").

"Will abortions be covered under this bill?"

No. Of course they will. US News & World Report admits that Democrats are fighting over this now.

"Will elderly people be euthanized under this bill?"

Of course they will. Perhaps this rocket scientist could take a moment and read the writings of Obama's "Health Care Czar", Ezekiel Emanuel. Zeke is on record saying that the disabled, the elderly and other "non-productive" members of society no longer merit care. It's a waste of rationed care, dontcha know? May I quote Dr. Mengele Emanuel?

...services provided to individuals who are irreversibly prevented from being or becoming participating citizens are not basic and should not be guaranteed. An obvious example is not guaranteeing health services to patients with dementia. A less obvious example Is is guaranteeing neuropsychological services to ensure children with learning disabilities can read and learn to reason.

Of course, the Marxist blogger hasn't bothered to read Emanuel and his ilk. The concerned electorate still befuddles him. 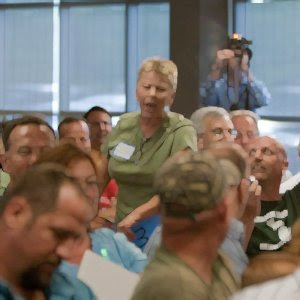 I don't understand these people but I can tell you this: nothing you or I or anyone else can say will change their minds...

...A woman holding a sign reading "Abortion is not health care" was told TWICE by Rep. Dingell that abortion would never be paid for with public funds under this bill and yet she still persisted in claiming it would. When he told the audience that illegal aliens will not be covered by this program, their response wasn't, "Oh, excellent", it was "LIAR!!!"

They can not be reasoned with; you will not change their minds...

...The thing to remember is that they are, in reality, a tiny minority. Vocal? Yes. Obnoxious? Yes. In the media? Yes. But do they represent mainstream America? I feel confident in saying, unequivocally: NO.

Of course not. Like all of the Obama administration's fabrications, this is yet another fairy tale that everyone should ignore.

Come to think of it, that behavior smells of Goebbels, too.