Nearly two weeks ago, the Wall Street Journal reported that unemployment had reached 10.2% and under-employment (the so-called "U-6" figure) had reached a shocking 17.5%.

Investment firm Blackmont Capital believes that the worst is yet to come. 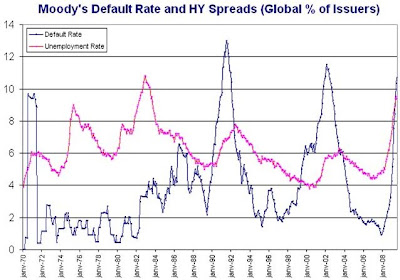 The basic assumption generated with this study results in a rate of ascent in the rate of unemployment once high yield default rates peaks. I will have applied an average of these three periods discussed going forward in our three base cases.

This rate of ascent is shown in the graph with the subsequent higher unemployment rate. It does carry upward for some time and will lag the turning point of the high yield default rate peak. 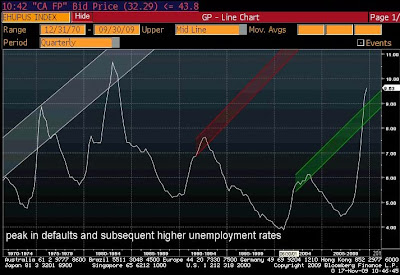 A simple back o' the napkin calculation for the total under-employment rate if the latter model holds: A U-6 figure of 26% to complement the 15% unemployment rate.

We got the change, but hope just left town.