The long knives of the media have truly been unsheathed for Sarah Palin of late.

Exhibit A: demonstrating all the class and balance of its owner Al Gore, the failing "Current TV" network slimed the erstwhile Vice Presidential candidate with some genuinely nasty references.

Days after announcing another huge layoff, Al Gore's Current TV referred to former Alaska Governor Sarah Palin as a "Gun-Ho" and a "TWILF." 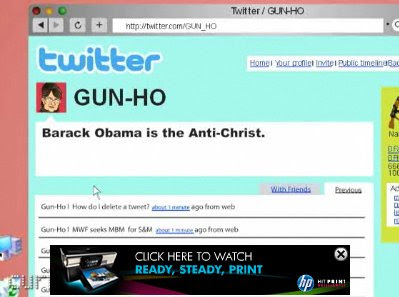 These disgraceful, sexually-charged epithets were part of an attack on prominent conservatives such as Rush Limbaugh and Glenn Beck, and came in the form of a cartoon ironically titled "The Stupid Virus"... 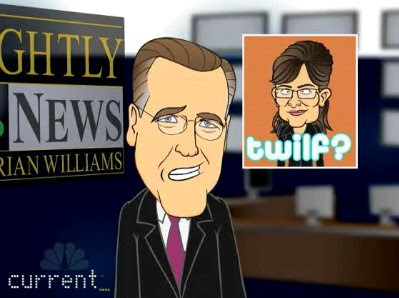 In the end, this was just a lot of conservative bashing in very bad taste, especially the shot of Palin's Twitter page and her astonishingly offensive screen name "Gun-Ho".

Given that Current TV's Nielsen ratings fall somewhere between airport radar and sonograms, this sort of attack is as feeble as it is distasteful.

And I'll patiently await the cries of protest from the National Organization of Women and other groups that claim to protect the fair treatment of women.

Exhibit B: The dying periodical Newsweek offered its own form of attack, helpfully informing the Republican Party that Palin is "bad news".

As for "bad news for everybody else," Palin is obviously "bad news" that people are hungry for. Palin’s book is going bonkers on the bestseller list and is proving to be one of the best stimulus programs the book industry has had in a good while — and Newsweek’s subscription rate is falling and they’re laying off employees by the dozen. 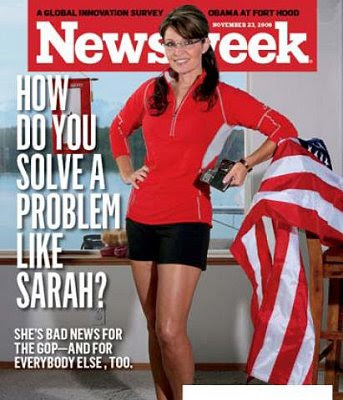 The only immediate “bad news” is for Newsweek — and when they do gratuitiously negative pieces on a figure who is looked up to by a demographic that spends a fortune on books… not to mention magazines, Newsweek’s death spiral makes all the more sense. This is why the mainstream newspaper business is dying too — you simply can’t dismiss a huge slice of the news consuming public with your bias without ultimately suffering economically.

Never mind that a woman -- who fought corruption both inside and outside her own party, managed a multi-billion-dollar oil deal, ran an entire state government and was suddenly thrust into the national spotlight -- became an overnight political sensation. Never mind that she attracts immense crowds wherever she goes.

She is despised by the Left for two reasons named Charlie Gibson and Katie Couric, who sandbagged Palin with interviews that were shocking in their naked attempts to humiliate the Governor.

Simply compare and contrast Gibson's interview questions for Barack Obama and those for Sarah Palin.


Charlie Gibson and Katie Couric both intentionally attacked Palin with questions designed to embarrass. Had Obama been queried with the same devious intentions, he'd have been reduced to the blubbering teleprompter-less soul we saw yesterday in Japan. 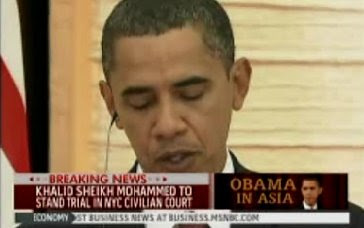 When confronted with the question of whether the U.S. did the right thing in bombing Hiroshima and Nagasaki, his response was "stumbling and ill-prepared." One need only watch the video to appreciate how pathetic his performance was, not to mention the fact that he -- once again -- refused to stick up for his own country.

It is clear that had Gibson and Couric attacked Obama with similar vigor, the Presidential candidate would have been reduced to the "Homina, homina, homina" filibuster he employs when his teleprompter takes its occasional cigarette break.

And here's something else to consider:

The fear and anxiety that Sarah Palin generates among the elitist snobs of the Left is truly something to behold. It reminds me of the insecurity and animosity they once reserved for the former Hollywood actor, Ronald Reagan.