Timing: NASA Warmist James Hansen's Book Due Out Next Month


You've got to feel for freelance writer Keith Kloor. He spent quite a bit of time preparing a profile of NASA's outspoken Warmist-in-Chief James Hansen for the December issue of Nature Magazine. The profile, of course, predates the recent CRU data disclosures that confirm the warmists' source code and data were as bogus as tungsten-filled gold bars. To call Kloor's profile of Hansen ill-timed, then, is somewhat akin to awarding Tiger and Elin Woods the prestigious "Married Couple of the Year" trophy.

James Hansen, arguably the world's most famous climate scientist, is prone to shouting from the rooftops. The director of NASA's Goddard Institute for Space Studies in New York, Hansen has, in recent years, become better known for his climate activism than his scientific research. Last July, he said on his website that "the global climate is near tipping points" and that the consequences would "be irreversible — if we do not promptly slow fossil fuel emissions during the next few decades". 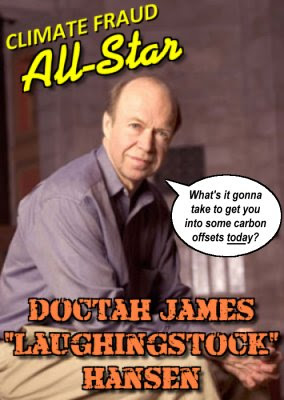 His conviction that a climate catastrophe is looming has led Hansen to increasingly take on the role of advocate, sending numerous pleading letters to world leaders and CEOs, and attending well-publicized protests against coal plants with the explicit aim of being arrested. It's also prompted him, at the age of 68, to write his first book. The title, Storms of My Grandchildren, refers to the ferocity of extreme weather events that will greet the next generation if the unmitigated use of fossil fuels continues.

But if someone can challenge Kloor for 'crappiest timing', Hansen may be that someone.

Hansen's new book, which -- surprise! -- promotes the dangers of warming, is due in December.

Its title -- Dreams from my Sauna -- was inspired by the famous incident in which Hansen was reportedly locked in a sauna for six hours. The after-effects of the episode left Hansen forever scarred, worried that his children and grandchildren would suffer a similar fate due to either climate change or a faulty door.

I just made up the prior paragraph. The actual title of Hansen's book is Storms of My Grandchildren, but -- given its timing -- the title won't matter: total sales in any case promise to be somewhere betwixt four and twelve given the revelation that CRU scientists completely gamed the system.

As a NASA employee, Hansen -- whose most recent nickname is "The Laughingstock" -- is, of course, on the public dole. He's one of many raving warmists who occupy positions of power in the current all-star lineup of Obama administration Marxists.

• Climate Czar Carol Browner, a self-identified socialist, serves on the board of one of the largest "carbon trading" companies.

• Science Czar John Holdren, a one-time advocate of forced abortions and mass sterilizations, is a professional, full-throated evangelist for the climate scam as the "Teresa and John Heinz Professor of Environmental Policy" at the John F. Kennedy School of Government.

Put simply, these would-be oligarchs went long on the climate change scam, figuring nothing could stop the march to Eco-Socialism. They were wrong.

Intrade's Cap-and-Trade contract -- which gauges the likelihood of passage of a carbon tax bill -- has dropped from $40 to an all-time low of sixty cents.

In other words, there's a better chance that Gene Simmons will be the next Supreme Court Justice.

Hansen, Browner and Holdren are now, officially, walking one-liners. Every time one of them enters a room, sound a rimshot.