California: drowning in so much red ink, state actually considered seceding to avoid paying its bills


California's budget woes are so daunting that the state actually considered seceding from the Union. Worse yet, California is only the first in a series of states confronting inevitable defaults (short of declaring war on the public sector unions that have eviscerated their balance sheets).

Facing a $21 billion dollar shortfall for the remainder of this fiscal year... with another $14.5 or so billion in 2010-2011, California is getting few headlines on this issue simply because it has become so rote. Just for perspective, as recently as August, the Department of Finance figured this latter number at $7.4 billion. Whoops. 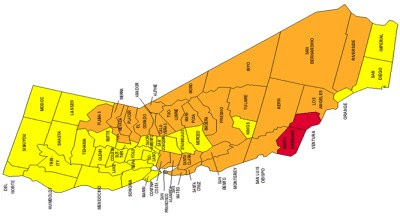 The Los Angeles Times manages, after twenty paragraphs, to accidentally trip over the central issue:

The state's financial problems predate the current recession and the gimmicks used to paper over the deficit, experts say. Year in and year out, state government spends roughly $10 billion more than it collects in tax revenue.

California, having somehow already carved out from what used to be a federal republic the ability to print its own currency [Ed: its recently printed IOUs], seems to have considered some additional and very drastic measures to avoid paying its debts. The Governator's own finance director apparently considered actual secession to short-circuit the state's obligations and continue enjoying the long established pattern of deficit spending they have hitherto established.

California's finances have been so bad that the governor's finance director, Mike Genest, told a budget forum in Washington last week that back in February he had combed through the U.S. Constitution to research whether California could legally declare bankruptcy -- or revert to some kind of territorial status. (Neither was realistic, he determined.)

...What emerges are the haunting sounds announcing the first death rattles of bloated state budgets and a glimpse of the eventual fate of tax-and-spend economies.

In the end, California's problems probably boil down to a lack of imagination. After all, with the right kind of government lawyers, it should be easy to pen an opinion letter authorizing a quick departure from the Union followed by a hasty (and debt free) re-annexation. Presto-chang-o! Debt-be-gone.

Or you can stop pouring cash into cushy social programs, stop paying your civil servants $200,000 per year and quit giving out 90% lifetime pensions at age 50-55...