The Left's disgust with the Obama administration is palpable. Emblematic of their disdain is a new T-shirt, called Hope Is Fading Fast, which Mediaite describes as "a devastating take on the iconic Obama poster."

A new offensive has been launched against President Obama, and if it catches on it may make as much noise as a Birther at a Town Hall. It’s the new... t-shirt from LA streetwear company Freshjive — a sad, disappointed take on the iconic “HOPE” poster by Shepard Fairey. Here’s how FreshJive describes it...

Pre-releasing on Black Friday is the t shirt design, “Hope is Fading Fast”. This is actually the first item releasing without the Freshjive brand name on it... 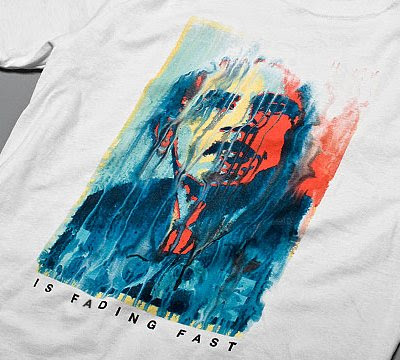 ...Read the recent post on the World’s Got Problems blog regarding how the Obama administration is maintaining continuity with its disgraced predecessor.

Ouch. FreshJive founder Rick Katz is well-known locally as both a streetwear pioneer as well as a provocateur (he was protested, for example, by the Jewish Defense League with two controversial Palestinian-themed shirts last June). This shirt will probably cause a more conflicted reaction as Democrats debate whether it’s fair or unfair, and Republicans will probably love it. What makes this image significant, of course, is that it comes from the left: In October 2007 Katz said, “Really in the end what drives me is making that one t-shirt that says ‘F*** off, Bush.’” Two years later, he seems to be sending Obama pretty much the same message.

The Obama theory of "trickle-up economics" is what we thought it would be: trickle-down poverty.

Term Papers said...
This comment has been removed by the author.
1:00 AM